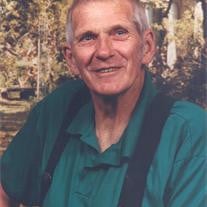 target=?blank?>(Must have Broadband Connection to view Video Tribute) Winifred Lyons, Jr., age 77, of Abingdon, Virginia, passed away on Saturday, January 24, 2009 at Valley Health Care Center in Chilhowie, Virginia. He was a native of Missouri and had lived in Washington County, Virginia since 1996. He was preceded in death by a daughter, Gloria Turnmire. He is survived by his wife, Mary M. Clark Lyons; one son, Kenneth Lyons of Washington; one daughter, Melissa McConnell and husband, Wayne, of Kingsport, Tennessee; a son-in-law, John K. Turnmire of Damascus, Virginia; two grandsons, two granddaughters, and several great grandchildren. The funeral service will be conducted at 8:00 P.M. Monday, January 26, 2009 in the Garrett Funeral Home Chapel with Mr. Wayne Baker, minister officiating. The family will receive friends from 6-7:45 P.M. Monday prior to the funeral service at Garrett Funeral Home. The committal service and inurnment will be at 2:00 P.M. Wednesday, January 28, 2009 at Sunset Memorial Park in Damascus, Virginia. Condolences may be sent to the family and a memorial video tribute may be viewed by visiting www.garrettfuneralhome.com .  Mr. Lyons and his family are in the care of Garrett Funeral Home, 203 N. Shady Avenue, Damascus, VA 24236, 276-475-3631.

The family of Winifred Lyons, created this Life Tributes page to make it easy to share your memories.

Send flowers to the Lyons, family.