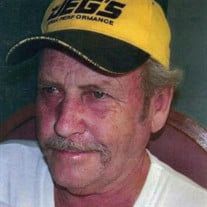 Willie Lee "Dob" Hess, 76, of Glade Spring, VA passed away on Saturday, December 26, 2020 in the Johnston Memorial Hospital, Abingdon, VA. He was born in Smyth County, VA on March 23, 1944, a son of the late Lee and Lena Hess. In addition to his parents, he was preceded in death by a son, Michael Brandon Hess; two brothers, Lawrence Hess and Carl Hess; a sister, Wanda Holbrook; his father-in-law, Baker Thomas; and his first wife, Tiny Mae Hess. He had made his home in Washington County, VA most of his life. He enjoyed old antique cars and spending time with his family, especially his grandkids. He is survived by his loving wife of 34 years, Alverta Hess; one daughter, Sandra Prater and her husband, Billy Jr., of Glade Spring, VA; one son, Bobby Hess and his wife, Terry, of Crockett, VA; five sisters, Florence Blevins, Margaret Granados, Eula Sandefur, and Virginia Hess, all of Chilhowie, VA, and Carol Smith and her husband, Kevin, of Blountville, TN; one brother, Robert Hess and his wife, Jan, of Chilhowie, VA; his mother-in-law, Edna Thomas of Glade Spring, VA; a sister-in-law, Alice Hess of Statesville, NC; four grandkids, Peyton, Lucas, and McKendra Prater, and Bobby Hess; and several nieces and nephews. The family will receive friends from 5:00 pm until 6:45 pm Wednesday, December 30, 2020 at Garrett Funeral Home. The funeral service will follow at 7:00 pm Wednesday in the Riverview Chapel at Garrett Funeral Home with Bro. Tracy Puckett officiating. The committal service and interment will be conducted at 11:00 am Thursday, December 31, 2020 at Mt. Olivet Cemetery in Glade Spring, VA. Pallbearers will be Earl Thomas, Mike Thomas, Tim Thomas, Cody Thomas, Bobby Hess, Eric Thomas, Bobby Thomas and Andy WIlcox. Those who wish to attend the committal service are asked to meet at the cemetery by 10:45 am Thursday. Condolences for the family may be sent and viewed by visiting www.garrettfuneralhome.com. Mr. Hess and his family are in the care of Garrett Funeral Home, 203 N. Shady Ave., Damascus, VA 24236; ph.#: (276) 475-3631.

Willie Lee "Dob" Hess, 76, of Glade Spring, VA passed away on Saturday, December 26, 2020 in the Johnston Memorial Hospital, Abingdon, VA. He was born in Smyth County, VA on March 23, 1944, a son of the late Lee and Lena Hess. In addition... View Obituary & Service Information

The family of Willie Lee "Dob" Hess created this Life Tributes page to make it easy to share your memories.

Send flowers to the Hess family.