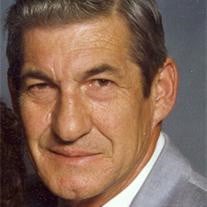 View this Videotribute William "Bill" Wallace Gentry, age 72, of Abingdon, Virginia, passed away on Wednesday, June 8, 2005, in Johnston Memorial Hospital, Abingdon, Virginia. He was a native of Johnson County, Tennessee and had lived in Mentor, Ohio for nineteen years and Dallas, Texas for twenty years before moving back to Abingdon in 1998. He was a son of the late Walker and Betty Maxwell Gentry. Mr. Gentry was owner and operator of B. G. Home Improvements. He was a veteran of the U. S. Army having served as a sergeant in the Korean Conflict, a member of George A. Holly Masonic Lodge #745 F. &A.M. in Willoughby, Ohio, and a member of the Ancient Accepted Scottish Rites, of Cleveland, Ohio. He is survived by his wife, Margaret A. Gentry; two daughters, Kathy A. Canfield and husband, Mark A., of Erie, Pennsylvania and Barbara G. Gentry, of Richardson, Texas; one granddaughter, Tiffany Esser Canfield, of Erie, Pennsylvania; one sister, Francis Broyles, of Kingsport, Tennessee; and several nieces and nephews. The funeral service will be conducted at 8:00 P.M. Saturday, June 11, 2005, in the Garrett Funeral Home Chapel with Rev. Mike Bowers officiating. Mr. John Hollingsworth will deliver a personal eulogy. The committal service and interment will be at 1:30 P. M. Sunday, June 12, 2005 at Sunset Memorial Park., Damascus, Virginia. Military graveside rites will be conducted by the Highlands Fellowship Veterans Honor Guard and Masonic rites conducted by the Liberty Hall Lodge #104. Honorary pallbearers will be Mark A. Canfield, John Hollingsworth, Frank Quesenberry, Johnny Gentry, Dave Morton, Ronnie Slagle, Bud Parks, Milan Esser, and Pat Minotti. The family will receive friends from 6-7:45 P.M. Saturday, prior to the funeral service at Garrett Funeral Home. Online condolences may be sent to the family and a memorial video tribute may be viewed at www.garrettfuneralhome.com. Mr. Gentry and his family are in the care of Garrett Funeral Home, 203 N. Shady Ave., Damascus, Virginia. (276) 475-3631.

View this Videotribute William "Bill" Wallace Gentry, age 72, of Abingdon, Virginia, passed away on Wednesday, June 8, 2005, in Johnston Memorial Hospital, Abingdon, Virginia. He was a native of Johnson County, Tennessee and had lived in... View Obituary & Service Information

The family of William Wallace Gentry created this Life Tributes page to make it easy to share your memories.