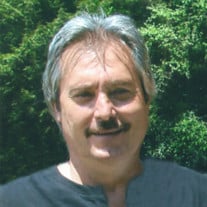 William Michael “Mike” Huffman, age 56, of Damascus, Virginia passed away on Friday, June 27, 2014 at Bristol Regional Medical Center in Bristol, Tennessee. He was longtime resident of Damascus, Virginia and is the son of Blaine and Barbara Huffman of Damascus, Virginia. He was an employee of Columbus McKinnon for 27 years and was a member of the First Baptist Church in Damascus. Mike enjoyed playing his guitar, fishing, and golfing. In addition to his parents, he was also survived by his wife of 37 years, Jamie Huffman; two daughters, Lindsey Watson and Lori Huffman both of Damascus, Virginia; two grandchildren, Keegan and Skylar Watson; two brothers, Rick Huffman and his wife, Shelia, of Damascus, Virginia, and Jeff Huffman and his wife, Ronda, of Bristol, Tennessee; several nieces and nephews; and his special companion, his dog, Neiko. The funeral service will be conducted at 1:00 P.M. Wednesday, July 2, 2014 in the Riverview Chapel at Garrett Funeral Home with Rev. Greg Alderman and Rev. Ken Meredith officiating. The family will receive friends immediately following the funeral service at the funeral home. The committal service and interment will be private. Pallbearers will be Tim Watson, Michael Watson, Jimmy Cole, Cody Cole, Cory Cornett, and Boyd Greer. Online condolences may be sent to the family by visiting www.garrettfuneralhome.com. Mr. Huffman and his family are in the care of Garrett Funeral Home, 203 N. Shady Ave., Damascus, VA 24236, ph.#: 276-475-3631.

The family of William Michael "Mike" Huffman created this Life Tributes page to make it easy to share your memories.