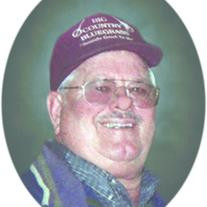 "" William J. Combs, age 74, of Troutdale, Virginia, passed away on Monday, May 25, 2009 at Johnston Memorial Hospital in Abingdon, Virginia. He was a native of Konnarock, Virginia and had lived in Unionville, Pennsylvania for several years before moving back to Konnarock in 1997. He was the son of the late Lillard and Mary Combs. In addition to his parents he was preceded in death by his first wife, Dorothy Faye Combs and a brother, David L. Combs. He was a 32nd degree mason with the Masonic Lodge #383 F. & A.M. in Coatesville, Pennsylvania. He was a life long woodworker. Mr. Combs was of the Baptist faith. He is survived by his wife, Christine Combs, of Sugar Grove, Virginia; four sons, William J. Combs, Jr. and his wife, Lynn, of Oxford, Pennsylvania, Larry D. Combs, of Oxford, Pennsylvania, Ronald J. Combs and his wife, Donna, of Nottingham, Pennsylvania, and James B. Combs and his wife, Jackie, of Oxford, Pennsylvania; one sister, Eva Stanley and her husband, Carl, of Mountain City, Tennessee; one brother, Fred L. Combs and his wife, Sarah, of Konnarock, Virginia; five grandchildren, Jesse Combs, Ryan Combs, Cody Combs, Shane Combs and Amanda Combs-Ruoss; and several nieces and nephews. The funeral service will be conducted at 10:00 A.M. Friday, May 29, 2009 in the Garrett Funeral Home Chapel with Rev. Jerry Fritz officiating. The committal service and interment will follow at Laurel Cemetery in Troutdale, Virginia. Pallbearers will be Herman Hoosier, James Huffman, Roy Riecke, Jimmy Hoosier, Russell Huffman, and Everett Coe. The family will receive friends from 6-8:00 P.M. Thursday, May 28, 2009 at Garrett Funeral Home. Condolences may be sent and a memorial video tribute may be viewed by visiting www.garrettfuneralhome.com. Mr. Combs and his family are in the care of Garrett Funeral Home, 203 N. Shady Ave., Damascus, VA 24236, 276-475-3631.

"" William J. Combs, age 74, of Troutdale, Virginia, passed away on Monday, May 25, 2009 at Johnston Memorial Hospital in Abingdon, Virginia. He was a native of Konnarock, Virginia and had lived in Unionville, Pennsylvania for several years... View Obituary & Service Information

The family of William Combs created this Life Tributes page to make it easy to share your memories.

Send flowers to the Combs family.