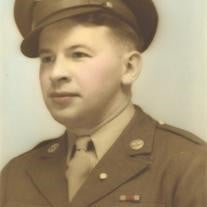 William Douglas "Bill" Osborne, age 86, of Damascus, Virginia, passed away Monday, October 31, 2005 at his residence. He was born in Russell County, Virginia on October 27, 1919 and lived in Damascus, Virginia since 1947. He was the son of the late Walter Osborne and Henrietta McNew Osborne. In addition to his parents, he was preceded in death by four brothers, Walter Osborne, Jr., Claude Osborne, Wilson Osborne, and Stanley Osborne. Mr. Osborne was a veteran of the U. S. Air Force having served during WWII, was retired from American St. Goban of Kingsport, Tennessee and was of the Baptist faith. He is survived by his wife, Gladys Osborne; three daughters, Judy Barr and her husband, Dave, of Damascus, Virginia, and Kathy Watkins and her husband, Clifford, of Jacksonville, Florida and Sherry Ford, of Damascus, Virginia; two brothers, Loyde Osborne, of Lebanon, Virginia and Tom Boyde, of Bristol, Tennessee; nine grandchildren; seven great grandchildren; and several nieces and nephews. The funeral service will be conducted at 1:00 P.M. Wednesday, November 2, 2005, at the graveside in Sunset Memorial Park with Rev. Mike Bowers officiating. Military graveside rites will be conducted by Highlands Fellowship Veterans Honor Guard. Pallbearers will be grandsons, Cliff Watkins, Shawn Barr, Jason Barr, Billy Ford, and Bobby Ford. There will be no viewing or visitation at the funeral home. The family will receive friends any time at the residence. Condolences may be sent to the family at www.garrettfuneralhome.com. Mr. Osborne and his family are in the care of Garrett Funeral Home, 203 N. Shady Ave., Damascus, VA 24236, 276-475-3631.

William Douglas "Bill" Osborne, age 86, of Damascus, Virginia, passed away Monday, October 31, 2005 at his residence. He was born in Russell County, Virginia on October 27, 1919 and lived in Damascus, Virginia since 1947. He was the son of... View Obituary & Service Information

The family of William Bill Osborne created this Life Tributes page to make it easy to share your memories.