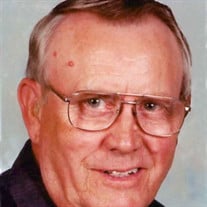 Warren M. Wilson, 86, of Damascus, VA went home to be with his Lord on Saturday, August 11, 2018 at his residence surrounded by his family. He was a life long resident of Damascus, VA and was a son of the late Thomas Isaac Wilson and Esther Blanche Barr Wilson. In addition to his parents, he was preceded in death by a sister, Helen Brooks. He was a veteran of the U.S. Army serving during the Korean Conflict. Warren was the pastor of Beulah Baptist Church for over 20 years and retired from Raytheon Corporation after 32 years of service. He is survived by his loving wife, Gary M. Wilson; four children, Debra Kay Abel, Gary Andrew Wilson and his wife, Cathy, Thomas Matthew Wilson and his wife, Janice, and Janet Denise Brown and her husband, Jim; eight grandchildren, Nakesha Latham and her husband, Troy, Matthew Abel, Molly Gutierrez and her husband, Samuel, Megan Pennington and her husband, Zach, Sarah Wilson, Rachael Wilson, Tiffany Greer and her husband, Drew, and Jordan Brown and his wife, Jessica; five great grandchildren; five sisters, Joan Smith, Kathryn Baker, Betty Wright and her husband, Lacy, Mary Grindstaff, and Hazel Gentry and her husband, Bill; one brother, Homer Wilson and his wife, Evon; and several nieces and nephews. The family would like to extend a special thanks to Sharon Arnold, Christy Widener, Samuel Gutierrez, Wendy Barbrey, and the staff and nurses at both Johnston Memorial Hospital and Bristol Regional Medical Center for all their special care. The family will receive friends from 6:00 PM until 8:00 PM Tuesday, August 14, 2018 at Garrett Funeral Home. The funeral service will be conducted at 11:00 AM Wednesday, August 15, 2018 in the Riverview Chapel at Garrett Funeral Home with Pastor Dwayne Dillard and Pastor Roger Boyer officiating. The committal service and interment will follow at Sunset Memorial Park in Damascus, VA with the Highlands Veterans Honor Guard conducting military graveside rites. Pallbearers will be selected from his family. Honorary Pallbearers will be Jack Rouse, Ben Widener, Joe Cook, and the men of Beulah Baptist Church. Condolences for the family may be sent and viewed by visiting www.garrettfuneralhome.com. Warren Wilson and his family are in the care of Garrett Funeral Home, 203 N. Shady Ave., Damascus, VA 24236; ph.#: (276) 475-3631.

Warren M. Wilson, 86, of Damascus, VA went home to be with his Lord on Saturday, August 11, 2018 at his residence surrounded by his family. He was a life long resident of Damascus, VA and was a son of the late Thomas Isaac Wilson and Esther... View Obituary & Service Information

The family of Warren M. Wilson created this Life Tributes page to make it easy to share your memories.

Send flowers to the Wilson family.