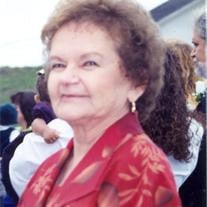 View this Videotribute Wanda Jean McClure, age 71, formally of Damascus, Virginia, passed away Wednesday, August 31, 2005 at Erwin Health Care Center, Erwin, Tennessee. She was a native of Johnson County, Tennessee and had made her home in Damascus, Virginia most of her life before moving to Bristol, Virginia in 1991. She was preceded in death by her mother, Nellie D. Moore and a brother, Ray L. Moore. She was retired from McBee Systems and was a member of Wrights Chapel United Methodist Church. She is survived by three daughters, Lt. Col. Wanda Carol McClure, of Orange Park, Florida, Martha Sue Worley and her husband, Garry, and Teresa Gail Chafin, and her husband, Ricky, all of Bristol, Virginia; two sons, Terry Lee McClure and wife, Teri, and Jeffrey Lynn McClure, all of Middleburg, Florida; ten grandchildren; fifteen great grandchildren; and two nieces and one nephew. The funeral service will be conducted at 8:00 P. M. Thursday, September 1, 2005, in the Garrett Funeral Home Chapel with Pastor Scott Price officiating. The committal service and inurnment will be at 10:00 A. M. Saturday, September 3, 2005 at Sunset Memorial Park. In lieu of flowers, memorial contributions may be sent to Erwin Health Care Center, 100 Stalling Lane, Erwin, TN 37650. The family will receive friends from 6-7:45 P. M. Thursday, September 1, 2005 prior to the funeral service at Garrett Funeral Home. The family would like to express their appreciation to the nursing administrative staff at Erwin Health Care Center, especially Sharon Thompson, Vennie Rice, and Mary DeVault. Condolences may be sent to the family and a memorial video tribute may be viewed at www.garrettfuneralhome.com. Wanda Jean McClure and her family are in the care of Garrett Funeral Home, 203 N. Shady Ave., Damascus, VA 24236, 276-475-3631.

View this Videotribute Wanda Jean McClure, age 71, formally of Damascus, Virginia, passed away Wednesday, August 31, 2005 at Erwin Health Care Center, Erwin, Tennessee. She was a native of Johnson County, Tennessee and had made her home in... View Obituary & Service Information

The family of Wanda McClure created this Life Tributes page to make it easy to share your memories.

Send flowers to the McClure family.