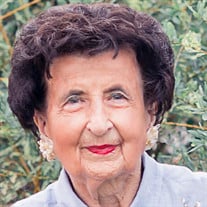 Virginia Vaughan Williamson, 87, of Meadowview, VA passed away on Thursday, January 23, 2020 in the Ballad Hospice House, Bristol, TN. She was born in Alvarado, VA on September 15, 1932, a daughter of the late Leslie Vaughan and Eula Lee Larimer Vaughan. In addition to her parents, she was preceded in death by her husband, Henry Catron Williamson. As a lifelong resident of Damascus, VA, she was active in her community, particularly with the local chapter of 4-H at Rhea Valley Elementary School. She was named a “Washington County Outstanding 4-H Leader” and each year at Damascus Middle School one student who is recognized for work ethic and involvement receives the “the Henry C. & Virginia Williamson Leadership Award” that is named in her and her husband’s honor. Her affinity with educating the next generation about farm life was probably inspired by many of her own experiences. After World War II, she married Henry C. Williamson, and worked alongside him on their family farm. Cooking lunch while the men were putting up hay was her specialty. As her children, Jim and Janet, grew up they learned to show cattle, make their own clothes, and competed at many 4-H competitions of their own. The only thing small about Virginia Williamson was her stature. She embodied boldness, determination, and poise. Even when working in the yard, she wouldn’t be caught without dawning her signature red lipstick. Above all, she was especially proud of her four granddaughters who affectionally called her “Mamaw.” She is survived by one daughter, Janet Williamson Fuller of Meadowview, VA; one son, Jimmy H. Williamson and his wife, Sheryl, of High Point, NC; four grandchildren, Laura Williamson King and her husband, Josh, Amy Ruth Thomas and her husband, Justin, Emily W. Laundra and her husband, Christopher, and Kayla I. Willis and her husband, Jonathan; six great-grandchildren, Grant L. King, Hope C. King, Willa E. King, Zephryn J. Laundra, Penny R. Thomas, and Edie J. Thomas; one sister, Ann Vaughan Pierce and her husband, Dan; one brother, Jerry Vaughan; and several nieces and nephews. A memorial service will be conducted at 4:00 pm Sunday, January 26, 2020, at Forest Hills Memory Gardens Mausoleum. Per Virginia and her family's wishes, In lieu of flowers, donations can be made to the Washington County 4-H Development Association, 234 West Valley Street, Abingdon, VA 24210. Donations will support the Williamson 4-H Leadership Award, which provides members the opportunity to attend Virginia 4-H Congress at Virginia Tech. Condolences for the family may be sent and viewed by visiting www.garrettfuneralhome.com. Mrs. Williamson and her family are in the care of Garrett Funeral Home, 203 N. Shady Ave., Damascus, VA 24236; ph: #: (276) 475-3631.

Virginia Vaughan Williamson, 87, of Meadowview, VA passed away on Thursday, January 23, 2020 in the Ballad Hospice House, Bristol, TN. She was born in Alvarado, VA on September 15, 1932, a daughter of the late Leslie Vaughan and Eula Lee Larimer... View Obituary & Service Information

The family of Virginia Vaughan Williamson created this Life Tributes page to make it easy to share your memories.

Send flowers to the Williamson family.