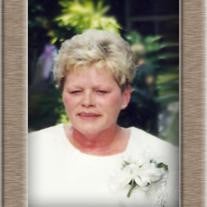 (To view Video Tribute you need a Broadband - DSL or Cable - connection) Vicki M. Gentry, age 60, of Damascus, Virginia, passed away on Monday, February 5, 2007, at Bristol Regional Medical Center.She was a life long resident of Washington County, Virginia, and was the daughter of the late Wayne and Hazel McConnell. She was a employee of Wal-Mart in Bristol, Virginia, and was a member of the Damascus United Methodist Church in Damascus, Virginia. She is survived by two sons, Robert Vannoy and his wife, Melissa, of Damascus, Virginia, and David Vannoy and his wife, Sarah, of Damascus, Virginia; six grandchildren, Brooke, Brittany, Brianna, Brandon, Braxton, and Nevaeh. The funeral service will be conducted at 12:00 Noon Thursday, February 8, 2007 in the Garrett Funeral Home Chapel with Pastor Jason Nunley officiating. The interment will follow at Sunset Memorial Park in Damascus, Virginia. In lieu of flowers, the family requests that memorial contributions be sent to the American Heart Association, 208 Sunset Drive, Johnson City, TN 37604. The family will receive friends from 6-8 P.M. Wednesday, February 7, 2007 at Garrett Funeral Home or anytime at the home of her son, Robbie. Condolences may be sent to the family and a memorial video tribute may be viewed by visiting www.garrettfuneralhome.com or fax condolences to 276-475-5902. Mrs. Gentry and her family are in the care of Garrett Funeral Home, 203 N. Shady Ave., Damascus, VA 24236, (276)-475-3631.

The family of Vicki Gentry created this Life Tributes page to make it easy to share your memories.