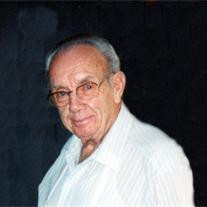 V. J. “Jack” DeBusk, age 90, of Damascus, Virginia, passed away Monday, December 14, 2009 at Johnston Memorial Hospital in Abingdon, Virginia. He was a life long resident of Washington County, Virginia and was a son of the late Tom and Lola DeBusk. He was a veteran of the U.S. Army during World War II and was a member of the V.F.W. and American Legion. He was a Mason with the Liberty Hall Lodge A.F. & A.M. No. 104 and was a Shriner. He attended the Damascus Presbyterian Church. In addition to his parents, he was preceded in death by his first wife, Jon Eva Kesterson DeBusk; his second wife, Patricia Rhea DeBusk; three sisters, Gay Shupe, Eula McVey, and Beatrice DeBusk; four brothers, Thomas “Short” DeBusk, Preston DeBusk, John DeBusk, and Clarence DeBusk. He is survived by one daughter, Diane Parris and her husband, Wayne, of Damascus, Virginia; two sisters, Mabel Bowman of Bristol, Virginia, and Reba Banner of Welch, West Virginia; one brother, Joe DeBusk of Cabot, Arkansas; a special friend and companion, Brenda Brown; and several nieces and nephews. A Masonic service will be conducted at 8:00 P.M. Wednesday, December 16, 2009 in the Riverview Chapel at Garrett Funeral Home with the Liberty Hall Lodge A.F. & A.M. No. 104 presiding. The funeral service will then follow the Masonic service with Rev. John Davis, Rev. Warren Wilson, and Dr. Michael Rush officiating. The committal service and interment will be at 11:30 A.M. Thursday, December 17, 2009 at Sunset Memorial Park in Damascus with military graveside rites conducted by the Highlands Fellowship Veterans Honor Guard. Pallbearers will be Bill Pierce, Jonathan Shupe, Joe Landry, Barry Salewsky, Herbert DeBusk, and John Ling. Honorary pallbearers will be Harold Wilcox, John Garrett, Tommy Cornett, Tom Trentadue, Hoil Houck, Terry Prater, and Bob Osborne. In lieu of flowers, the family requests memorial contributions be sent to the Damascus Presbyterian Church, the Shriner’s Children’s Hospital, or to a favorite charity of one’s choice. The family will receive friends from 6:00 P.M. to 7:45 P.M. Wednesday prior to the Masonic service at Garrett Funeral Home. Online condolences may be sent to the family and a memorial video tribute may be viewed by visiting www.garrettfuneralhome.com.   Mr. DeBusk and his family are in the care of Garrett Funeral Home, 203 N. Shady Avenue, Damascus, VA 24236, 276-475-3631.

V. J. “Jack” DeBusk, age 90, of Damascus, Virginia, passed away Monday, December 14, 2009 at Johnston Memorial Hospital in Abingdon, Virginia. He was a life long resident of Washington County, Virginia and was a son of the late Tom and Lola... View Obituary & Service Information

The family of V. "Jack" DeBusk created this Life Tributes page to make it easy to share your memories.