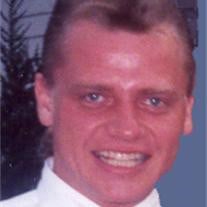 Troy Kidwell, age 36, of Laurel Bloomery, Tennessee, passed away Saturday March 26, 2005 in Charlotte, North Carolina. Troy was born in Sundance, Wyoming, where he inherited the rugged, independent outdoor spirit of the west. He is the son of James and Edna Kidwell of Damascus, Virginia. He lived most of his life in Millersville, Maryland, where he loved playing baseball and football. It was in Maryland he was baptized before moving to his ancestral home of Damascus, Virginia, in 1999. In Damascus after teaming with his father and two dogs, for many years driving long haul trucks, he started his own business called J & T Backhoe Service. He lived in the mountains of Tennessee and never failed to care for strays that were lucky enough to cross his path. Troy never met a stranger and always had a smile and hug to share. His favorite time of the year was the annual family reunion, where he was a favorite among the many aunts, uncles, and cousins. In addition to his parents he is survived by one son, Troy Wayne Kidwell, Jr., of Pasadena, Maryland; one brother, Michael Lee Kidwell and his wife, Rebecca, of Mansfield, Massachusetts; his paternal grandparents, Jennings and Francis Kiner, of Essex, Maryland; two nephews, Jacob Kidwell and Joshua Kidwell; and several aunts, uncles, and cousins. The funeral service will be conducted at 8:00 P.M. Wednesday, March 30, 2005, in the Garrett Funeral Home Chapel with Rev. Danny Adams officiating. The committal service and interment will be at 11:00 A.M. Thursday, March 31, 2005, at Sunset Memorial Park in Damascus, Virginia. The family, pastor, pallbearers, and friends will all meet at 10:30 A.M. Thursday at Garrett Funeral Home to go in procession to the cemetery. Pallbearers will be Adam Henderson, James Coffer, Robert Adams, David Adams, Chris Eaton, Rocky Henderson, and Mike Estep. In lieu of flowers, the family requests that memorial contributions be sent to the Damascus Volunteer Fire Department, P.O. Box 426, Damascus, VA 24236. The family will receive friends from 6-7:45 P.M. Wednesday prior to the funeral service at Garrett Funeral Home. On-line condolences may be sent to the family at www.garrettfuneralhome.com. Mr. Kidwell and his family are in the care of Garrett Funeral Home, 203 N. Shady Ave., Damascus, VA. 24236, telephone 276-475-3631.

Troy Kidwell, age 36, of Laurel Bloomery, Tennessee, passed away Saturday March 26, 2005 in Charlotte, North Carolina. Troy was born in Sundance, Wyoming, where he inherited the rugged, independent outdoor spirit of the west. He is the son... View Obituary & Service Information

The family of Troy Kidwell created this Life Tributes page to make it easy to share your memories.

Send flowers to the Kidwell family.