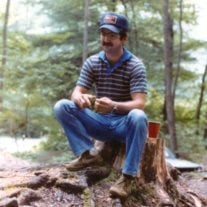 Tommy L. Sweet, age 66, of Damascus, Virginia passed away on Thursday, February 6, 2014. He suffered 2 ½ years with ALS and passed away in the Wellmont Hospice House in Bristol, Tennessee after a brief stay. He was born April 18, 1947 to the late Charles J. and Elizabeth Thompson Sweet. Tommy retired from Ball Corp after 30 years and had served in the U.S. Navy from 1966-1969. He was an avid outdoorsman, hunter, nature lover, and knife collector. He was a member of Painter Creek Church of Christ. In addition to his parents, he was also preceded in death by one brother, Ronald Eugene Sweet. He is survived by his loving wife, Betty Rowe Sweet; one son, Jonathan David Sweet and his wife, Colleen, of Reston, Virginia; one very special grandson, Charles T. Sweet; one brother, Robert M. Sweet and his wife, Virgie, of Abingdon, Virginia; one sister, Connie Kinder and her husband, Sam, of Tannersville, Virginia; and several nieces and nephews. The funeral service will be conducted at 2:00 P.M. Sunday, February 9, 2014 in the Riverview Chapel at Garrett Funeral Home with Mr. Mark Gaminde, minister officiating. The committal service and interment will follow at Sunset Memorial Park in Damascus, Virginia. Pallbearers will be Jeff Morgan, Rob Morgan, Tony Bebber, David Morrison, Matthew Long, and Gavin Blevins. Honorary Pallbearers will be Tom Hayes, Bob White, Archie Skeens, Kenny Rowe, Don Morgan, Wes Collins, Robert Chappel, and Jeff Mumpower. In lieu of flowers, the family requests memorial contributions be sent to the ALS Association, 1275 K. Street NW, Suite 250, Washington, D.C. 20005. The family will receive friends from 6:00 P.M. to 8:00 P.M. Saturday, February 8, 2014 at Garrett Funeral Home. The family would like to extend a special thanks to the staff at Wellmont Hospice House and also Stephanie Roop and Jennifer Davenport for their outstanding care. Online condolences may be sent to the family and a memorial video tribute may be viewed by visiting www.garrettfuneralhome.com. Mr. Sweet and his family are in the care of Garrett Funeral Home, 203 N. Shady Ave., Damascus, VA 24236, ph.#: 276-475-3631.

Tommy L. Sweet, age 66, of Damascus, Virginia passed away on Thursday, February 6, 2014. He suffered 2 ½ years with ALS and passed away in the Wellmont Hospice House in Bristol, Tennessee after a brief stay. He was born April 18, 1947 to the... View Obituary & Service Information

The family of Tommy L. Sweet created this Life Tributes page to make it easy to share your memories.

Send flowers to the Sweet family.