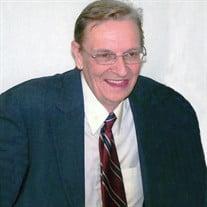 Tim M. Wyatt, 81, of Konnarock, VA traveled on to be with his Heavenly Father on Sunday, June 9, 2019 at Johnston Memorial Hospital in Abingdon, VA. He was of the Lutheran Faith. He was born August 28, 1937 in Konnarock, moved to Norton at age 7 and later attended John I. Burton High School. While in Norton, he met the Love of his Life, Geraldine Huffman, and they married on April 19, 1958. He also found his love of bluegrass music and performed with various bands in the region, including The Rolling Firestones, Messa Grass, The Sanders Brothers and Virginia Sweethearts, among many other greats throughout the years. He was a retired Master Electrician and Plumber and returned to Konnarock in 1989, which he loved. Tim was an avid fisherman, loved camping, gardening, and the mountains he called home. He was quite the jokester with a quick wit and shared his love of laughter with everyone he met. He never left a quiet stranger, sad child or hungry animal. Tim and Gerry enjoyed many years of traveling together and living life to the fullest with their beloved pup, Mitzi Anne. He was loved by many for his giving heart, helping hand and was always ready to tell a funny story or a tall tale from days gone by. He will be greatly missed by all those who knew and loved him. He was preceded in death by his parents, Howard and Essie Wyatt; a sister, Sarah Collier; two brothers, Ted Wyatt and Fred Wyatt; and a daughter-in-law, Kitty C. Wyatt. Tim is survived by his loving and devoted wife of over 61 years, Gerry Wyatt; his son, Randy Wyatt of Pound, VA; two daughters, Deborah Muncy and her husband, Steve, of Check, VA and Kimberly Roberts of Abingdon, VA; a brother, Roger Wyatt and his wife, Charlotte, of Wise, VA; a sister, Vickie Trent and her husband, Roscoe, of Troutdale, VA; six grandchildren, Joshua Aaron Wyatt and his wife, Erin, Stephanie Nicole Wyatt, Brandi Ingram and her husband, Wayne, Emily McGuire and her husband, Dustin, Cassie Muncy, and Stephanie Brooks; seven great grandchildren, Maxx Avery Wyatt, Rafe Ingram, Limary Ingram, Tripp Ingram, Kinley Brooks, Hayden Brooks, and Marley Wyatt; and a host of nieces, nephews, and dear friends. The family will receive friends from 5:00 PM until 7:00 PM Tuesday, June 11, 2019 at Garrett Funeral Home. The funeral service will follow at 7:00 PM Tuesday in the Riverview Chapel at Garrett Funeral Home with Steve Cress officiating. The committal service and interment will be conducted at 11:00 AM Wednesday, June 12, 2019 at Laurel Valley Cemetery in Konnarock, VA. Pallbearers will be Joshua Wyatt, Steve Muncy, Steve Cress, Roscoe Trent, Wayne Ingram, and Dustin McGuire. Those who wish to attend the committal service are asked to meet at the funeral home by 10:15 AM Wednesday to go in procession to the cemetery. Daddy, we love and miss you so much and now you are playing music in the Heavenly Band, with your bass in one hand and Ole Sam in the other. We will meet again, our Father, Friend, and Hero. Condolences for the family may be sent and viewed by visiting www.garrettfuneralhome.com. Mr. Wyatt and his family are in the care of Garrett Funeral Home, 203 N. Shady Ave., Damascus, VA 24236; ph.#: (276) 475-3631.

Tim M. Wyatt, 81, of Konnarock, VA traveled on to be with his Heavenly Father on Sunday, June 9, 2019 at Johnston Memorial Hospital in Abingdon, VA. He was of the Lutheran Faith. He was born August 28, 1937 in Konnarock, moved to Norton at... View Obituary & Service Information

The family of Tim M. Wyatt created this Life Tributes page to make it easy to share your memories.

Send flowers to the Wyatt family.