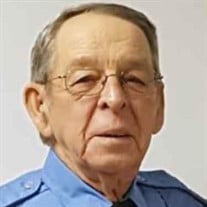 Thomas "Hunter" Faris, 72, of Damascus, VA passed away on January 20th, 2021 in the Johnston Memorial Hospital, Abingdon, VA. He was born in Abingdon, VA on May 3rd, 1948, a son of the late Charles Howard Faris and Pauline Fogleman Faris. Hunter was a loving husband, father, brother, grandfather, great-grandfather and friend. He was a longtime resident of Damascus and was a veteran having served in the Army during the Vietnam War. He was a longtime member of the Damascus Volunteer Fire Department, VFW Post Number 9830 of Damascus, VA and the American Legion of Damascus, VA. Hunter spent most of his life wearing many hats as far as his work. Owning his own backhoe service, running a mulching business, and truck driving. Hunter also enjoyed freshwater fishing as well as saltwater fishing. He was also apart of the committee that established the Wheel of Freedom in the Damascus Town Park. Hunter is survived by his loving wife of 38 years, Lois Cathern Cornett Faris; four sons, John Brabson and wife Missy of Lansing, NC, David Faris and wife Valerie of Abingdon, VA, Timothy Brabson and wife Pam of Damascus, VA, and Benjamin Faris and wife Tracy of Abingdon, VA; two sisters, Audrey Kestner of Abingdon, VA, and Doris Worley and husband Kenneth of Abingdon, VA; two grandsons, Jarod Faris of Abingdon, VA, and Austin Faris of Abingdon, VA; three granddaughters, Kelly Brown and husband Brady of Lansing, NC, Katelyn Brabson of Lansing, NC, and Casey Prater of Bristol, VA; two great-grandsons, Griffin Rosenbalm and Maverick Brown, and several nieces, nephews and countless friends. The family would like to extend a very special thank you to Kermit Turner and family for all the help they have given throughout the years. A private graveside service will be conducted at Sunset Memorial Park, Damascus, VA with Greg Alderman officiating. Due to COVID-19, for the safety of the Damascus community and all family members and close friends in attendance, we are asking that all CDC guidelines be followed including the use face masks and the practice of social distancing. Pallbearers will be members selected from the Damascus Volunteer Fire Department. Military rites will be conducted by the VFW Post Number 4667 of Marion, VA. In lieu of flowers, the family is asking for all donations be made to the Damascus Volunteer Fire Department, P.O. Box 426, Damascus, VA 24236. Condolences for the family may be sent and viewed by visiting www.garrettfuneralhome.com. Mr. Faris and his family are in the care of Garrett Funeral Home, 203 N. Shady Ave., Damascus, VA 24236; ph.#: (276) 475-3631.

Thomas "Hunter" Faris, 72, of Damascus, VA passed away on January 20th, 2021 in the Johnston Memorial Hospital, Abingdon, VA. He was born in Abingdon, VA on May 3rd, 1948, a son of the late Charles Howard Faris and Pauline Fogleman Faris. Hunter... View Obituary & Service Information

The family of Thomas Hunter Faris created this Life Tributes page to make it easy to share your memories.

Thomas &quot;Hunter&quot; Faris, 72, of Damascus, VA passed away on January...

Send flowers to the Faris family.