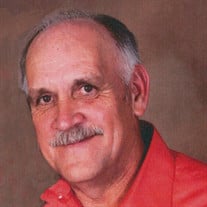 Terry Lee Vannoy, 67, left this life for his home in Heaven on Friday, August 28, 2020 after a courageous battle with pancreatic cancer. Terry was the son of the late Curly and Dorothy Vannoy of Damascus, where he lived most of his life before moving to the Denton’s Valley area to help care for his in-laws, the late Shannon and Bonnie Denton. He always put the needs of others before his own and he never complained. Terry was an earnest worker who took pride in every project. He loved to work and he was well-respected by everyone who had the pleasure of working with him. He was a master mason and builder who worked for several companies before serving the Washington County Virginia School System for 29 years. Terry was quiet and a little bit shy, but he also never met a stranger. He would do anything for anyone and he treated everyone he met with respect and love. He had a distinct snicker and an infectious laugh that could make anyone smile. As much as he loved working, he also loved vacationing at the beach with his family. There are many wonderful memories of those family vacations that will live on for generations to come. Family left to treasure his memory include his wife, Linda Denton Vannoy. A picture of a true love story, they were completely devoted to each other, and you rarely saw one without the other. They shared their lives for 46 years and most recently shared their home with Pebbles, their playful Pekingese. They are considered parents by five nieces, three nephews and their families with whom they have shared every important moment of life. Also surviving is his brother Mike Vannoy and his sister Charlene and her husband, Maynard Richardson. A Memorial Service for Terry will be held on Sunday, August 30, 2020 at 2:00 p.m., at the church where he faithfully attended for years, Greendale Chapel, 17468 Rich Valley Road, Abingdon with Rev. Jerry Eggers officiating. Interment will follow the service at Montgomery Cemetery. Honorary Pallbearers will be his work family from the maintenance department and the many friends at Washington County Virginia School System as well as the men of Greendale Chapel. Active pallbearers will be Curtis Wright, Nick Sweet, Heath Denton, Mitchell Wright, Wesley Sweet, Darren Miller, Jamie Sullins, Gary Carrier and Joey Walton. The family will receive friends after the service or anytime at Terry’s home. In lieu of flowers, donations should be made in honor of Terry to Tri-State Baptist Children's Home, P.O. Box 888, Bristol, TN 37621. Condolences for the family may be sent and viewed by visiting www.garrettfuneralhome.com. Mr. Vannoy and his family are in the care of Garrett Funeral Home. Phone #: (276) 475-3631.

Terry Lee Vannoy, 67, left this life for his home in Heaven on Friday, August 28, 2020 after a courageous battle with pancreatic cancer. Terry was the son of the late Curly and Dorothy Vannoy of Damascus, where he lived most of his life before... View Obituary & Service Information

The family of Terry Lee Vannoy created this Life Tributes page to make it easy to share your memories.

Terry Lee Vannoy, 67, left this life for his home in Heaven on...

Send flowers to the Vannoy family.