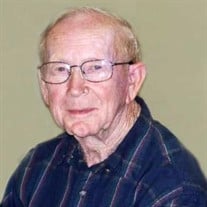 Spencer J. Greer, 90, formerly of Troutdale, VA passed away peacefully on Tuesday, December 28, 2021 in the Rural Retreat Care Center, Rural Retreat, VA. He was born in Green Cove, VA on June 9, 1931, a son of the late Roby Lee Greer and Viller M. Lewis Greer. In addition to his parents, he was preceded in death by his loving step-mother, Pauline Greer; one son, Stanley Greer; a daughter and son-in-law, Sylvia "Diane" and Daniel Smith; son-in-law, Danny McGhee; daughter-in-law, Janet Greer; grandson, Benjamin Conley; four brothers, Robert Greer, Jess Greer, Albert Greer, and Howard Greer; two sisters, Opal Greer and Ruth Dolinger. He had lived in Northern, VA for several years before returning to Troutdale, VA. He was proud of his skills fabricating sheet metal ducts for the installation of heating and air conditioning units. He loved singing and recording bluegrass gospel music over the years. He also enjoyed coon hunting. He was of the Baptist faith. Spencer is survived by two daughters, Kathy McGhee and Amy Dooley; three sons, Bobby Greer, Jeffrey Greer, and Darryl Greer; two sisters, Betty Pennington and Mary Anderson; three brothers, Harlan Greer, Harold Greer, and Elmer Greer; 13 grandchildren, 16 great grandchildren, and several nieces and nephews. The family will receive friends from 5:00 pm until 7:00 pm Sunday, January 2, 2022 at Garrett Funeral Home. The funeral service will follow at 7:00 pm Sunday, January 2, 2022, in the Riverview Chapel at Garrett Funeral Home with Rev. Harlan Greer and Rev. Tim Greer officiating. Also for those who may not be able to be in attendance at the funeral home, a live stream viewing of the funeral service will be shared by visiting the Garrett Funeral Home Facebook page. The committal service and interment will be conducted at 11:00 am Monday, January 3, 2022 at Green Cove Baptist Church Cemetery. Pallbearers will be selected from family and friends. Those who wish to attend the committal service are asked to meet at the cemetery on Monday by 10:45 am. Condolences for the family may be sent and viewed by visiting www.garrettfuneralhome.com. Mr. Greer and his family are in the care of Garrett Funeral Home, 203 N. Shady Ave., Damascus, VA 24236; ph.#: (276) 475-3631.

The family of Spencer J. Greer created this Life Tributes page to make it easy to share your memories.