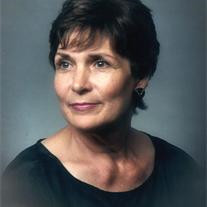 Sarah Blevins Smith, age 73, of Lakeland, Florida, passed away on Wednesday, April 15, 2009 at her residence. She was a native of Konnarock, Virginia, and was a daughter of the late Ulysses M. Blevins and Katherine E. McDaniel Blevins. She had lived in Lakeland, Florida for the past twenty years. She was the widow of William L. Smith. Mrs. Smith was a member of the Azen Baptist Church, in Konnarock, Virginia. She is survived by three daughters, Debra Arnold and her husband, Johnny, of Mountain City, Tennessee, Pamela Cyphert, of Lakeland, Florida, and Tammy Post and her husband, Lee, of Lakeland, Florida; two sons, William Ricky Smith and his wife, Connie, and Douglas Smith and his wife, Kim, all of Lakeland, Florida; two sisters, Nannie Hash and her husband, Bill, of Nokesville, Virginia and Anne Campbell and her husband, James, of Mountain City, Tennessee;  three brothers, Lawrence Blevins and his wife, Jessie, of Konnarock, Virginia, Ira Blevins and his wife, Shelby, of Konnarock, Virginia and Archie Ed Blevins and his wife, Betty, of Marion, Virginia; eleven grandchildren; and several nieces and nephews. The funeral service will be conducted at 2:00 P.M. Saturday, April 18, 2009 at the Azen Baptist Church in Konnarock, Virginia with Rev. Ronnie Blevins officiating. The committal service and interment will follow in the Azen Cemetery. Pallbearers will be Gary Blevins, James Blevins, Scott Blevins, Micky Blevins, Joe Fritts, and Justin Dixon. In lieu of flowers, the family requests memorial contributions could be sent to the Azen Baptist Church, c/o Elizabeth Waddell, 28925 Jeb Stuart Highway, Damascus, VA 24236. The family will receive friends from 7-9 P.M. Friday, April 17, 2009 at Garrett Funeral Home in Damascus, Virginia. Condolences may be sent to the family and her memorial video tribute may be viewed by visiting www.garrettfuneralhome.com . Mrs. Smith is in the care of Garrett Funeral Home, 203 N. Shady Avenue, Damascus, VA 24236, 276-475-3631.

Sarah Blevins Smith, age 73, of Lakeland, Florida, passed away on Wednesday, April 15, 2009 at her residence. She was a native of Konnarock, Virginia, and was a daughter of the late Ulysses M. Blevins and Katherine E. McDaniel Blevins. She... View Obituary & Service Information

The family of Sarah Smith created this Life Tributes page to make it easy to share your memories.

Send flowers to the Smith family.