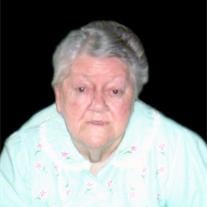 Sarah W. “Tot” Crockett, age 89, of Damascus, Virginia passed away Wednesday, July 27, 2011 at Grace Healthcare Center of Abingdon, Virginia. She was a life long resident of Damascus, Virginia and was a daughter of the late Charles and Virginia Mullins. She had worked in food service at Holston High School for many years and later worked at Abingdon Manor Home for the Aged until her retirement. In addition to her parents, she was preceded in death by her husband, Ralph H. Crockett; and two sisters, Christine Jarrell and Sylvia Elliott.  She is survived by one daughter, Cindy Widener and her husband, Larry, of Laurel Bloomery, Tennessee; two sons, David Crockett and his wife, Mary, of Church Hill, Tennessee and Danny Crockett, her loving caregiver, of Damascus, Virginia; three grandchildren, Jeremy Widener and his wife, Brandy, David Crockett Jr. and his companion, Cathy Barrah, and Kevin Crockett and his wife, Lachandra; five great grandchildren, Haley Crockett, Isaiah Crockett, Nicholas Crockett, Ella Crockett, and Mary Katherine Widener; and several nieces and nephews.  A memorial service will be conducted at 7:00 P.M. Sunday, July 31, 2011 in the Riverview Chapel at Garrett Funeral Home with Pastor Michael Icenhour officiating. A private graveside service will be held at Sunset Memorial Park. The family will receive friends from 6:00 P.M. to 7:00 P.M. Sunday prior to the memorial service at the funeral home. The family would like to extend a special thanks to Dr. Raina Sluder and her staff, Claire and Ruth at Johnston Memorial Hospital, Eula Sluder, and Becky DeArmond. Online condolences may be sent to the family and a memorial video tribute may be viewed by visiting www.garrettfuneralhome.com. Mrs. Crockett and her family are in the care of Garrett Funeral Home, 203 N. Shady Ave., Damascus, VA 24236, ph.#: 276-475-3631.

The family of Sarah Crockett created this Life Tributes page to make it easy to share your memories.

Send flowers to the Crockett family.