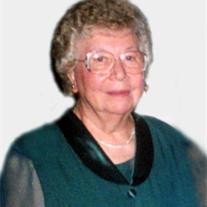 Sallie Richardson Blevins, age 85, of Damascus, Virginia passed away on Friday, August 17, 2012 at Wellmont Hospice House in Bristol, Tennessee. She was a life long resident of Washington County, Virginia and was a daughter of the late Frank and Callie Richardson. She was a member of the First Baptist Church in Damascus, where she taught Sunday school and sang in the church choir. She enjoyed music and loved her church, community, and especially her family. In addition to her parents, she was also preceded in death by her husband, Ted Blevins.  She is survived by one daughter, Carol B. Weaver of Bristol, Tennessee; one son, Stuart Blevins and his girlfriend, Denise Smith, of Meadowview, Virginia; one step-son, Keith Blevins and his wife, Eileen, of Shady Valley, Tennessee; one sister, Addie Toler of Winterville, North Carolina; three grandchildren, Jennifer Weaver, Samantha Jenkins and her husband, Aaron, and Todd Blevins; two great grandchildren, Michael Jenkins and Carter Jenkins; and several nieces and nephews.  The funeral service will be conducted at 8:00 PM Saturday, August 18, 2012 in the Riverview Chapel at Garrett Funeral Home with Rev. Wayne Guynn officiating. The committal service and interment will be at 1:30 PM Sunday, August 19, 2012 at Sunset Memorial Park in Damascus, Virginia. The family would like to extend a special thanks to two special caregivers, Tammy Sullivan and Helen Patzke, the nurses and staff at Wellmont Hospice House, and also to Ralph and Mary Alice Cornett. The family will receive friends from 6:00 PM to 7:45 PM Saturday prior to the funeral service at Garrett Funeral Home. Online condolences may be sent to the family and a memorial video tribute may be viewed by visiting www.garrettfuneralhome.com. Mrs. Blevins and her family are in the care of Garrett Funeral Home, 203 N. Shady Avenue, Damascus, VA 24236, ph.#: 276-475-3631.

Sallie Richardson Blevins, age 85, of Damascus, Virginia passed away on Friday, August 17, 2012 at Wellmont Hospice House in Bristol, Tennessee. She was a life long resident of Washington County, Virginia and was a daughter of the late Frank... View Obituary & Service Information

The family of Sallie Blevins created this Life Tributes page to make it easy to share your memories.