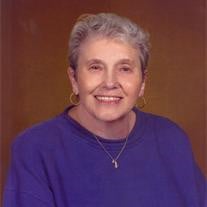 View this Videotribute Ruth E. McVey, age 72, of Bristol, Virginia, passed away on Saturday, May 6, 2006 at her residence. She was a native of Damascus, Virginia, and was the daughter of the late Clyde and Pearl Owens. She was a long time resident of Rogersville, Tennessee, and moved to Athens, Georgia, for two years before moving to Bristol in 1999. Mrs. McVey was retired from Holston Electric Cooperative in Rogersville, Tennessee, and was a member of the East Bristol Church of Christ. In addition to her parents, she was also preceded in death by her husband, Chesil H. McVey; two brothers, Jack Owens and Robert Owens; and one sister, Mildred Owens. She is survived by two sons, Dr. David Scott McVey and his wife, Diane, of Beatrice, Nebraska, and Dan L. McVey and his wife, Brenda, of Clyde, Texas; five grandson, Joshua McVey and his wife, Kim, Caleb McVey, David McVey and his wife, Becky, John Paul McVey, and Kyle McVey; one granddaughter, Tessa McVey; two great grandsons, Hunter McVey and Noah McVey; two brothers, Bert Owens and his wife, Irene, of Bristol, Virginia, and John Owens and his wife, Terry, of Sunset Beach, North Carolina; two sisters, Lillian Parker, of Plano, Texas, and Retha Cook Ganoe, of Reisterstown, Maryland; a sister-in-law, Estelle Owens, of Taylors Valley, Virginia; and several nieces and nephews. The funeral service will be conducted at 8:00 P.M. Monday, May 8, 2006, in the Garrett Funeral Home Chapel with Mr. Bill Haywood, minister officiating. The committal service and interment will be at 11:00 A.M. Tuesday, May 9, 2006, at Sunset Memorial Park in Damascus, Virginia. In lieu of flowers, the family requests that memorial contributions be sent to the Wellmont Hospice House, 280 Steele's Road, Bristol, TN 37620. The family will receive friends from 6:00 to 7:45 P.M. Monday prior to the funeral service at Garrett Funeral Home. Condolences may be sent to the family and a video memorial tribute may be viewed at www.garrettfuneralhome.com. Mrs. McVey and her family are in the care of Garrett Funeral Home, 203 N. Shady Ave., Damascus, VA 24236, 276-475-3631.

View this Videotribute Ruth E. McVey, age 72, of Bristol, Virginia, passed away on Saturday, May 6, 2006 at her residence. She was a native of Damascus, Virginia, and was the daughter of the late Clyde and Pearl Owens. She was a long time... View Obituary & Service Information

The family of Ruth McVey created this Life Tributes page to make it easy to share your memories.

Send flowers to the McVey family.