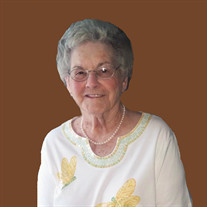 Ruby Hand Boone, age 91, of Damascus, Virginia passed away on Saturday, November 14, 2015 at the home of her daughter and son-in-law, Linda and Jerry Hayes, in Abingdon, Virginia where she has lived for the past eight years. She was born on December 25, 1923 in Johnson County, Tennessee and had lived in Damascus, Virginia most of her life. She was a daughter of the late Charles and Lessie Henderson and her step-mother, Stella Henderson. In addition to her parents, she was also preceded in death by three husbands, Paul Hand, Robert Cooper, and Thurman Boone; three sons, James "Bud" Hand, Dennis Hand, and Larry Hand; two granddaughters, Karen Hand and Sherry Hand; and three brothers and five sisters. She was a retired upholster seamstress from Monarch Furniture Company in Jamestown, NC. Ruby was a member of the Damascus Senior Citizens and the ladies auxiliary of the V.F.W. Post No. 9830. She was a member of the First Baptist Church in Damascus, Virginia and had attended Sutherland Community Church. She is survived by two daughters, Linda (Jerry) Hayes of Abingdon, VA, and Connie (Glenn) Meredith of High Point, NC; one son, Charles Hand of Shady Valley, TN; five step-sons, Steve (Janet) Boone of CA, Ken (Jan) Boone and Ron (Sandy) Boone all of MI, David (Carol) Boone of TX, and Richard Boone of FL; eleven grandchildren, Charlotte Ball, Donna Hutchins, Duane Hand, Brian Hand, Missy Hubbard, Chad McGlamery, Aaron McGlamery, Ray Meredith, Cindy Scott, Melissa Harding, and Karen Mincey; two daughters-in-law, Emma Hand and Carolyn Hand both of Jamestown, NC; several great grandchildren, great great grandchildren, and nieces and nephews. The family would like to express a special thank you to Home Nursing Company and Dr. William Handy for all the love and care shown to Ruby during her illness. The family will receive friends from 6:00 pm until 7:45 pm Monday, November 16, 2015 at Garrett Funeral Home. The funeral service will follow at 8:00 pm Monday, November 16, 2015, in the Riverview Chapel at Garrett Funeral Home with Pastor Dave Allen and Pastor Mack Harr officiating. The committal service and interment will be conducted at 11:00 am Tuesday, November 17, 2015 at Sunset Memorial Park, Damascus, VA. In lieu of flowers, the family is requesting that donations be made to St. Jude Children's Research Hospital, 262 Danny Thomas Place, Memphis, TN 38105 or Damascus Volunteer Rescue Squad, P.O. Box 458, Damascus, VA 24236. Online condolences for the family may be sent and viewed by visiting www.garrettfuneralhome.com. Mrs. Boone and her family are in the care of Garrett Funeral Home, 203 N. Shady Avenue, Damascus, VA 24236; ph.#: (276) 475-3631.

Ruby Hand Boone, age 91, of Damascus, Virginia passed away on Saturday, November 14, 2015 at the home of her daughter and son-in-law, Linda and Jerry Hayes, in Abingdon, Virginia where she has lived for the past eight years. She was born on... View Obituary & Service Information

The family of Ruby Hand Boone created this Life Tributes page to make it easy to share your memories.

Ruby Hand Boone, age 91, of Damascus, Virginia passed away on...

Send flowers to the Boone family.