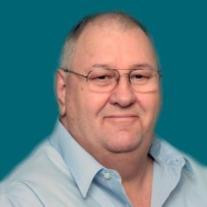 Roy “Joe” Morefield, Jr., age 66, of Meadowview, Virginia passed away on Sunday, November 18, 2012 at Valley Health Care Center in Chilhowie, Virginia. He was a life long resident of Washington County, Virginia and was a son of the late Roy and Juanita Morefield. He retired from the Virginia Department of Transportation in 2004 after 32 years of service. He loved to play golf and go camping. He was a member of One Way Ministries. In addition to his parents, he was also preceded in death by two sisters, Jean Barlow and Kathy Morefield. He is survived by his wife, Kathy Morefield; one son, Keith Morefield and his wife, Tammy, of Glade Spring, Virginia; one sister, Verna Smith of Damascus, Virginia; one brother, Edward Morefield and his wife, Mae, of Damascus, Virginia; three granddaughters, Cassie Morefield, Kayla Mullins and her husband, Tony, and Courtney Ratliff and her husband, Zachary; one step-great granddaughter, Irelynd Mullins; and several nieces and nephews. The funeral service will be conducted at 2:00 P.M. Wednesday, November 21, 2012 in the Riverview Chapel at Garrett Funeral Home with Pastor Gordon Taylor and Pastor Mike McCoy officiating. The committal service and interment will follow at New Lutheran Cemetery. Pallbearers will be Johnny Smith, James Smith, Doug Smith, Tom Fizer, Zack Ratliff, Donnie Ritchie, Derek Barlow, and Charlie Taylor. Honorary pallbearers will be John Campbell, David Atkins, Junior Turnmire, Freddie Hawthorne, and Employees of VDOT. The family will receive friends from 7:00 P.M. to 9:00 P.M. Tuesday, November 20, 2012 at Garrett Funeral Home. Online condolences may be sent to the family and a memorial tribute video viewed by visiting www.garrettfuneralhome.com. Mr. Morefield and his family are in the care of Garrett Funeral Home, 203 N. Shady Ave., Damascus, VA 24236, ph.#: 276-475-3631.

Roy “Joe” Morefield, Jr., age 66, of Meadowview, Virginia passed away on Sunday, November 18, 2012 at Valley Health Care Center in Chilhowie, Virginia. He was a life long resident of Washington County, Virginia and was a son of the late Roy... View Obituary & Service Information

The family of Roy "Joe" Morefield, Jr. created this Life Tributes page to make it easy to share your memories.