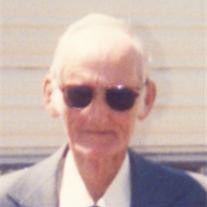 View this Videotribute Rolston Gibbs "R. G." Spears, age 80, of Abingdon, Virginia passed away Friday, February 4, 2005 at V. A. Medical Center, Mountain Home, Tennessee. He was a native of Wise, Virginia and had lived in Washington County, Virginia since 1956. He was a son of the late Rev. William and Martha Spears and was preceded in death by seventeen brothers and sisters. Mr. Spears was a veteran of the U. S. Navy from 1943 until 1945, U. S. Army from 1947 until 1950, and U. S. Air Force from 1951 until 1956 having served during World War II and the Korean Conflict. He was a member of the Disabled American Veterans Chapter 57, Abingdon, Virginia, was an avid fisherman, and was of the Holiness Faith. He is survived by his wife, Mary Rash Spears; one daughter, Faye Hill and her husband, Rick, of Bristol, Virginia; three step-sons, John Alex Sproles and his wife, Connie, of Glade Spring, Virginia, Henry G. Sproles, of Hopkinsville, Kentucky, and Ronnie Gilman and his wife, Susan, of Abingdon, Virginia; two grandchildren, Lesley Hill and Travis Hill; three step-grandchildren, Jonathan Wayne Sproles, Rachel Nicole Sproles, and Haleigh Brooke Gilman; one sister, Edith Rasnake, of Abingdon, Virginia; special friends, Rick and Judy Widener, Jason and Justin Widener, Becky and Jesse Hill and Virginia Arnold; several nieces and nephews; and three special pets, Blackfoot, Frisky, and Buzz. The funeral services will be conducted 8:00 P. M. Monday, February 7, 2005 in the Garrett Funeral Home Chapel with Rev. Rick Morrell and Rev. Rick Wyatt officiating. The committal service and interment will be at 2:00 P. M. Tuesday, February 8, 2005 at Veterans Affairs National Cemetery, Mountain Home, Tennessee. Military graveside rites will be presented by Highlands Fellowship Veterans Honor Guard. Honorary pallbearers will be Rick Hill, G. L. Widener, Travis Hill, Rick Widener, Timothy Peyton, Lonnie Lewis, Jr. and Donnie Arnold. In lieu of flowers, donations may be made to the family. The family will receive friends 6-7:45 P. M. Monday prior to the funeral service or anytime at the residence of Rick and Judy Widener. Condolences may be sent to our website at www.garrettfuneralhome.com. Mr. Spears and his family are in the care of Garrett Funeral Home, 203 N. Shady Ave., Damascus, VA., telephone 276-475-3631.

The family of Rolston R. G. Spears created this Life Tributes page to make it easy to share your memories.