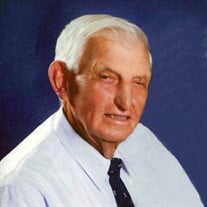 Roland H. Dunn, 88, of Damascus, VA passed away on Wednesday, June 12, 2019 at Johnston Memorial Hospital in Abingdon, VA. He was born in Damascus, VA on May 10, 1931, a son of the late Robert and Hattie Dunn. In addition to his parents, he was preceded in death by four sisters, Opal Dunn, Catherine Vannoy, Eileen Stewart, and Juanita Thompson; and one brother, Rance Dunn. He had lived in Paxton, IL and also in Falls Church, VA and in Stafford, VA before returning back home to Damascus, VA. He was a veteran of the U.S. Air Force serving during the Korean Conflict and retired from the Department of the Army. Roland enjoyed hunting, fishing, and especially spending time farming. He was a member of St. John Lutheran Church in Abingdon, VA. He is survived by his loving wife of 67 years, Marty Dunn; a son, Mike Dunn and his wife, Melissa, of Pittsboro, NC; three sisters, Wilma Miller, Rowena "Teen" Buckley, and Dixie McCracken; two brothers, Edd Dunn and his wife, Irma, and Harold Dunn and his wife, Mary Katherine; and several nieces and nephews. The family will receive friends from 1:00 PM until 2:00 PM Saturday, June 15, 2019 at Garrett Funeral Home. The funeral service will follow at 2:00 PM Saturday in the Riverview Chapel at Garrett Funeral Home with Pastor G. Scott Homesley officiating. The committal service and interment will follow at Sunset Memorial Park in Damascus, VA. Pallbearers will be Ethan Dunn, Hunter Price, Austin Berry, Michael Burnett, Jason Dunn, and Jackie Stewart. In lieu of flowers, the family is requesting that donations be made to St. John Lutheran Church, 807 E. Main St., Abingdon, VA 24210. Condolences for the family may be sent and viewed by visiting www.garrettfuneralhome.com. Mr. Dunn and his family are in the care of Garrett Funeral Home, 203 N. Shady Ave., Damascus, VA 24236; ph.#: (276) 475-3631.

Roland H. Dunn, 88, of Damascus, VA passed away on Wednesday, June 12, 2019 at Johnston Memorial Hospital in Abingdon, VA. He was born in Damascus, VA on May 10, 1931, a son of the late Robert and Hattie Dunn. In addition to his parents,... View Obituary & Service Information

The family of Roland H. Dunn created this Life Tributes page to make it easy to share your memories.

Send flowers to the Dunn family.