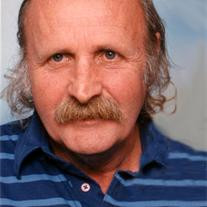 ROGER W. SEXTON, age 58, of Glade Spring, Virginia passed away Friday, October 29, 2010 at Johnson City Medical Center in Johnson City, Tennessee.  He was born in Arlington, Virginia and has lived in Washington County, Virginia most of his life. He was a son of the late Walter Sexton and Mary Sexton Miller. Roger was a graduate of Abingdon High School in 1970 and was a veteran of the U.S. Navy where he spent most of his time in Underwater Swim School in Key West, Florida. He was a member of the American Legion. Mr. Sexton was a retired auto mechanic for 30 years, having worked at Don’s Garage in Abingdon, Jay Johnson Chrysler in Bristol, Campbell Ford in Abingdon, and Crabtree Pontiac in Bristol. He loved the outdoors and enjoyed hunting and fishing but most of all he enjoyed spending time with his family. In addition to his parents, he was also preceded in death by a sister, Katheryn Gail Sexton and a brother, Charles “Corky” Sexton.  Roger is survived by his wife, Jackie Coalson Sexton; two sons, Brian Sexton of Glade Spring, Virginia, and Douglas Sexton and his wife, Amy, of Virginia Beach, Virginia; five grandchildren, Xavier Sexton, Olivia Sexton, Ella Sexton, Rachel Sexton, and Joseph Richardson; three sisters, Annette Caudill (twin sister) of Bristol, Tennessee, Marlene Dickenson and her husband, John, of Bristol, Virginia, and Pam Minnick and her husband, Roy, of Bristol, Virginia; three brothers, Scott Sexton and his wife, Glenda, of Glade Spring, Virginia, Wayne Sexton and his wife, Deb, of Bristol, Virginia, and Dale Sexton and his wife, Vanessa, of Mendota, Virginia; and several nieces and nephews.  A memorial service will be conducted at 8:00 P.M. Tuesday, November 2, 2010 in the Riverview Chapel at Garrett Funeral Home in Damascus, Virginia with Pastor Robbie Coggins officiating. Military graveside rites conducted by the Highlands Fellowship Veterans Honor Guard and the Virginia National Guard Honor Guard. Honorary pallbearers will be Roy Minnick, John Dickenson, Rocky Coalson, Sam Rouse, and Clifton Rouse. In lieu of flowers, memorial donations may be sent to the Highlands Fellowship Veterans Honor Guard, c/o Butch Neal, 18162 Black Hollow Road, Abingdon, VA 24210. The family will receive friends from 6:00 PM to 7:45 PM Tuesday prior to the memorial service at Garrett Funeral Home. Online condolences may be sent to the family and a memorial video tribute may be viewed by visiting www.garrettfuneralhome.com. Mr. Sexton and his family are in the care of Garrett Funeral Home, 203 N. Shady Avenue, Damascus, VA 24236, 276-475-3631.

ROGER W. SEXTON, age 58, of Glade Spring, Virginia passed away Friday, October 29, 2010 at Johnson City Medical Center in Johnson City, Tennessee.  He was born in Arlington, Virginia and has lived in Washington County, Virginia most of his... View Obituary & Service Information

The family of Roger Sexton created this Life Tributes page to make it easy to share your memories.

Send flowers to the Sexton family.