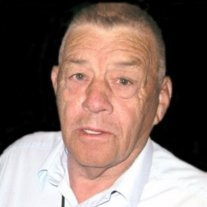 Robert "Bobby" Dean Ritchie, age 75, of Glade Spring, Virginia passed away on Wednesday, May 15, 2013 in the Johnston Memorial Hospital, Abingdon, Virginia. He was born in Damascus, Virginia on November 13, 1937, a son of the late George Washington Ritchie and Lorena Neil Parris Ritchie. He was a resident of Glade Spring for several years. He retired from Brunswick/Marion Composites after 30 years of service. While working there he developed many lifelong friends. He and his wife also ran the R&W Grocery in Widener Valley for many years. He enjoyed volunteering to umpire at the little league baseball games. He also enjoyed dancing and going to bluegrass/country music jam. Robert is survived by his loving wife of 55 years, Pat Ritchie, 2 Sons - Mike Ritchie of Chilhowie, VA, and Tony (Laurie) Ritchie of Douglasville, GA; Brother - Melvin (Nadine) Ritchie of Meadowview, VA; 2 Granddaughters - Tonya Elliott and Megan (Brandon) Thompson; 2 Grandsons - Chris Ritchie and Travis Ritchie; Great Grandson - Aidan Elliott; 2 Great Granddaughters - Abby Elliott and Ally Elliott; Special Friends - Marsha Ritchie, Ricky Hall, Cecil McVey, and Vickie Lester; and several nieces and nephews. The family will receive friends from 6:00 pm until 7:45 pm Friday, May 17, 2013 prior to the funeral service at Garrett Funeral Home. Friends may also call at the residence of Pat Ritchie at any other times. The funeral service will be conducted at 8:00 pm Friday, May 17, 2013, in the Riverview Chapel at Garrett Funeral Home with Rev. Gary Ritchie officiating. The committal service and interment will be conducted at 10:00 am Saturday, May 18, 2013 at Sunset Memorial Park in Damascus, Virginia. Honorary Pallbearers will be Bill Widener, Bill Baker, Bill McCall, Travis Ritchie, Chris Ritchie, Johnny Childress, Joe Childress, Herbie DeBusk, Cecil McVey. Everyone is asked to meet at the cemetery at 9:45 am Saturday. In lieu of flowers, the family is requesting that donations be made to St. Jude Children's Research Hospital, P.O. Box 1000 Dept 142, Memphis, TN 38101-9908. Online condolences for the family may be sent and a memorial tribute may be viewed by visiting www.garrettfuneralhome.com. Mr. Ritchie and his family are in the care of Garrett Funeral Home, 203 N. Shady Avenue, Damascus, VA.(276) 475-3631.

Robert "Bobby" Dean Ritchie, age 75, of Glade Spring, Virginia passed away on Wednesday, May 15, 2013 in the Johnston Memorial Hospital, Abingdon, Virginia. He was born in Damascus, Virginia on November 13, 1937, a son of the late George Washington... View Obituary & Service Information

The family of Robert "Bobby" Dean Ritchie created this Life Tributes page to make it easy to share your memories.

Send flowers to the Ritchie family.