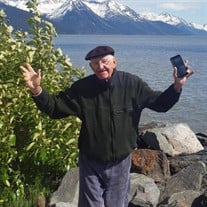 Robert L. Phillips, Jr., 83, of Damascus, VA passed away on Saturday, March 19, 2022 at his residence. He was born in Washington County, VA on February 1, 1939, a son of the late Robert Lee Phillips, Sr. and Fannie Dowell Phillips. In addition to his parents, he was preceded in death by his first wife, Cora Riley Phillips; one son, Terry Phillips; one brother, Bill Martin; and three sisters, Arlene Shumate, Gerlene Rosenbaum, and Laura Umbarger. He had lived in Martinsville and Radford, VA for a few years prior to moving back to Damascus, VA in 1969. He was a veteran of the U.S. Army. Robert retired from Columbus McKinnon Corporation after 31 years of service. He was a member of Damascus Senior Citizens where he played the guitar in their band. He enjoyed fishing and hunting. He attended High Point Baptist Church. Robert is survived by his loving wife of 26 years, Doris Widener Phillips; one daughter, Tina Widener; one son, Ronnie Phillips; four step-children, Paul Odum (Anita), Mark Odum (Becky), Larry Odum (Missy Bellamy), and Debbie Odum (Shane Allen); 11 grandchildren, 18 great grandchildren, and several nieces and nephews. The family will receive friends from 5:00 pm until 7:00 pm Tuesday, March 22, 2022 at Garrett Funeral Home. The funeral service will follow at 7:00 pm Tuesday in the Riverview Chapel at Garrett Funeral Home with Pastor David Critcher and Pastor Robby Coggins officiating. The committal service and interment will be conducted at 11:00 am Wednesday, March 23, 2022 at Sunset Memorial Park in Damascus, VA with U.S. Army National Guard Honor Guard and Highlands Veterans Honor Guard conducting military graveside rites. Pallbearers will be selected from family and friends. In lieu of flowers, the family is requesting that donations be made to Damascus Senior Citizens, 209 Legion St., Damascus, VA 24236. Condolences for the family may be sent and viewed by visiting www.garrettfuneralhome.com. Mr. Phillips and his family are in the care of Garrett Funeral Home, 203 N. Shady Ave., Damascus, VA 24236; ph.#: (276) 475-3631.

Robert L. Phillips, Jr., 83, of Damascus, VA passed away on Saturday, March 19, 2022 at his residence. He was born in Washington County, VA on February 1, 1939, a son of the late Robert Lee Phillips, Sr. and Fannie Dowell Phillips. In addition... View Obituary & Service Information

The family of Robert L. Phillips Jr. created this Life Tributes page to make it easy to share your memories.

Send flowers to the Phillips family.