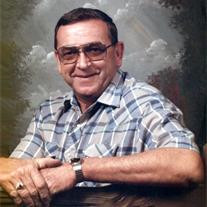 Robert Chelsie Gentry, age 72, of Damascus Virginia passed away Saturday, July 3, 2010 at Johnston Memorial Hospital in Abingdon, Virginia. He was a native of Laurel Bloomery, Tennessee where he worked for many years at Iron Mountain Stoneware and later at McBee Systems in Damascus, Virginia. He was of the Catholic Faith. He was preceded in death by his parents, Chelsie A. and Eva B. Gentry. He is survived by one son, Nicky Gentry; three daughters, Patty Trivett and her husband, Darrell, Kathy McCulloch and her husband, Robbie, and Michelle Atwood and her husband, Mike; one sister, Barbara Gentry; the mother of his children, Ruby G. Gentry; four grandchildren, Travis Gentry, Timmy Gentry and his wife, Sabrina, Chelsea McCulloch, and Katie McCulloch; one great grandchild, Colton Gentry; two step great grandchildren, Daykota Hilton and Austyn Hilton; one niece, Sylvia Hazelwood; his companion of twenty-six years, Bonnie VanHuss, and family, Jerry, Jennifer, and Xain VanHuss, and Allen and Joni Roberts. A celebration of the life of Robert Chelsie Gentry will be celebrated at 7:00 P.M. Tuesday, July 6, 2010 in the Riverview Chapel at Garrett Funeral Home with Father Timothy E. Keeney, celebrant officiating. The committal service and inurnment will be private at Gentry Family Cemetery in Laurel Bloomery, Tennessee. In lieu of flowers, the family requests memorial contributions be sent to the St. Anne’s Catholic Church, 350 Euclid Avenue, Bristol, VA 24201. The family will receive friends from 5:30 P.M. to 6:45 P.M. Tuesday prior to the celebration of life service at Garrett Funeral Home. Online condolences may be sent to the family and viewed by visiting www.garrettfuneralhome.com. Mr. Gentry and his family are in the care of Garrett Funeral Home, 203 N. Shady Avenue, Damascus, VA 24236, 276-475-3631.

Robert Chelsie Gentry, age 72, of Damascus Virginia passed away Saturday, July 3, 2010 at Johnston Memorial Hospital in Abingdon, Virginia. He was a native of Laurel Bloomery, Tennessee where he worked for many years at Iron Mountain Stoneware... View Obituary & Service Information

The family of Robert Gentry created this Life Tributes page to make it easy to share your memories.