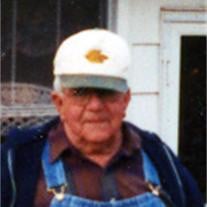 View this Videotribute Robert G. "Bob" Johnson, age 74, of Abingdon, Virginia passed away Saturday, December 31, 2005 at his residence. He was a lifelong resident of Washington County, Virginia. He was a veteran of the U. S. Marine Corp. and received the Purple Heart for injuries received during combat in the Korean Conflict. Mr. Johnson worked in the tobacco business for fifty years and was a dairy, beef farmer. He was preceded in death by two sons, Michael R. Johnson and Robert Russell "Rusty" Johnson and a sister, Peggy Ann Tuggle. He is survived by his wife, Betty Johnson; three sons, Daniel M. Johnson and his wife Sandra, of Meadowview, Virginia, Jeffrey G. Johnson and his wife, Kim, of Rocky Mount, Virginia, and Joe H. Johnson and his wife, Deborah Wood, of Abingdon, Virginia; one daughter, Sally Johnson and her husband, Tony Mullins, of Abingdon, Virginia; a daughter-in-law, Neva Johnson, of Damascus, Virginia; two sisters, Dorothy Mullins and Faye Jones, both of Roanoke, Virginia; one brother, Tom Johnson, of Bristol, Tennessee; twelve grandchildren; and several nieces and nephews. The funeral service will be conducted at 3:00 P.M. Monday, January 2, 2006 at Garrett Funeral Home Chapel with Rev. John Stapleton officiating. Military rites will be conducted by Highlands Fellowship Veterans Honor Guard. In lieu of flowers, contributions may be sent to the Juvenile Diabetes Foundation, 3201 Brandon Avenue, Suite 5, Roanoke, VA 24018 or the Damascus Volunteer Rescue Squad, P. O. Box 458, Damascus, VA 24236. The family will receive friends from 1:00 until 2:45 P. M. prior to the funeral service at Garrett Funeral Home. Condolences may be sent to the family or a video memorial tribute may be viewed at www.garrettfuneralhome.com. Mr. Johnson and his family are in the care of Garrett Funeral Home, 203 N. Shady Ave., Damascus, Va 24236, 276-475-3631.

View this Videotribute Robert G. "Bob" Johnson, age 74, of Abingdon, Virginia passed away Saturday, December 31, 2005 at his residence. He was a lifelong resident of Washington County, Virginia. He was a veteran of the U. S. Marine Corp. and... View Obituary & Service Information

The family of Robert Bob Johnson created this Life Tributes page to make it easy to share your memories.