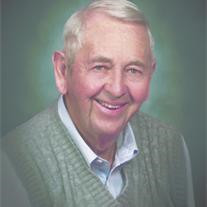 Ralph W. Blevins, age 85, of Konnarock, Virginia, passed away Thursday, October 8, 2009 at his residence. He was a native of Mt. Hope, West Virginia and had lived in Washington, D.C. while he was employed with Maritime Administration of the U.S. Department of Transportation. He later lived in Northern Virginia from 1952 to 1979 and upon retirement moved back to Whitetop, Virginia and later to Konnarock. He had received his Bachelor of Science degree at Ben Franklin University in Washington, D.C. and was a veteran of the U.S. Army serving during World War II. He was a member of the American Legion Post No. 47 in Washington, D.C., was a mason with the Mouth of Wilson Masonic Lodge No. 223 A.F. & A.M., and was a member of the Whitetop Baptist Church in Whitetop, Virginia. He is survived by his loving wife of sixty-three years, Eva Blevins; two daughters, Barbara Morgan of Konnarock, Virginia, and Sharon Humphreys and her husband, Hank, of Lexington, Virginia; one son, Ralph Blevins, Jr. and his wife, Sue, of Glade Spring, Virginia; two sisters, Cleda Rhodes of Waynesboro, Virginia, and Geneva Miller of Aiken, South Carolina; one brother, Homer Blevins of Meadowview, Virginia; four grandchildren, Lauren Eckard, Matthew Blevins, Josh Humphreys, and Alison Hubbard; three great grandchildren, Ava Eckard, Jacob Hubbard, and Emily Eckard; and several nieces and nephews. The funeral service will be conducted at 10:00 A.M. Monday, October 12, 2009 at St. Matthew Lutheran Church in Konnarock, Virginia with The Rev. Candis O’Meara officiating. The committal service and interment will follow at Whitetop Baptist Cemetery in Whitetop, Virginia with Masonic graveside rites conducted by the Mouth of Wilson Masonic Lodge No. 223 A.F. & A.M. Pallbearers will be Matthew Blevins, Josh Humphreys, Jonathan Hubbard, Barry Blevins, Phillip Blevins, and Ron Richardson. Honorary pallbearers will be Mark Blevins, Harvey Neff, W.W. Farmer, John Hash, Bobby Blevins, Richard Miller, and Bud Bishop. In lieu of flowers, the family requests memorial contributions be sent to the Hospice of Southwest, Virginia, 600 W. Ridge Road, Wytheville, VA 24382. There will be no viewing or visitation at the funeral home. Online condolences may be sent to the family and viewed by visiting www.garrettfuneralhome.com. Mr. Blevins and his family are in the care of Garrett Funeral Home, 203 N. Shady Avenue, Damascus, VA 24236, 276-475-3631.

Ralph W. Blevins, age 85, of Konnarock, Virginia, passed away Thursday, October 8, 2009 at his residence. He was a native of Mt. Hope, West Virginia and had lived in Washington, D.C. while he was employed with Maritime Administration of the... View Obituary & Service Information

The family of Ralph Blevins created this Life Tributes page to make it easy to share your memories.