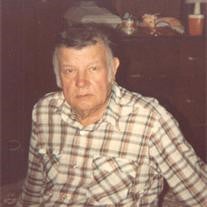 R. C. Eller, age 83, of Damascus, Virginia, passed away on Saturday, October 31, 2009 at Johnston Memorial Hospital in Abingdon, Virginia. He was a native of Washington County, Virginia and had lived in Bristol, Tennessee for thirty years before moving back to Washington County, Virginia in 1999. He was a veteran of the U.S. Army during World War II and was a bronze star recipient. He was a member of the V.F.W. Post 9830 in Damascus and the Disabled American Veterans. Mr. Eller retired from Raytheon Corporation in 1989 and was a member of One Way Ministries in Damascus. He was preceded in death by his first wife, Nancy Cullop Eller, and one daughter, Melissa Eller Thomas. He is survived by his wife, Sue Eller of Damascus, Virginia; three daughters, Betty Cullins and her husband, Scott, of Aurora, Colorado, Linda Arnold and her companion, Troy Ward, of Damascus, Virginia, and Cynthia Eller and her companion, James Gammon, of Richmond, Virginia; one son, Danny Eller and his wife, Connie, of Bristol, Virginia; six children from his second marriage, Deborah Head of Damascus, Virginia, Robin Whitten and her companion, Donna Oliver, of Bluff City, Tennessee, Teresa Badger and her husband, Brian, of Bristol, Tennessee, Sherry Swift of Montrose, Pennsylvania, Richard Sacks and his wife, Pam, of Bristol, Virginia, and Charles E. Swift and his companion, Mary Witt, of Bristol, Virginia; a son-in-law, Mike Thomas of Abingdon, Virginia; four sisters, Mary Manuel and Jaunka Lumpkin, both of Bristol, Tennessee, Edith Price of Elkton, Maryland, and Bertha Lee Whitaker of Transfer, Pennsylvania; two brothers, Glen Eller and his wife, Jessee, of Elkton, Maryland, and Ernest Eller and his wife, Carol, of Meadowview, Virginia; twenty-five grandchildren, twenty-four great grandchildren, and several nieces and nephews. The funeral service will be conducted at 8:00 P.M. Tuesday, November 3, 2009 in the Riverview Chapel at Garrett Funeral Home with Rev. Gary Ritchie and Rev. Warren Wilson officiating. The committal service and interment will be at 1:00 P.M. Wednesday, November 4, 2009 at the V.A. National Cemetery, Mountain Home, Tennessee with military graveside rites conducted by the Highlands Fellowship Veterans Honor Guard. Pallbearers will be Bobby Venable, Kenny Venable, Mike Thomas, Bill Shell, Zack Arnold, D.J. Woodard, Johnny Cato, and Roger Buchanan. Honorary pallbearers will be Johnny Wilcox, Frank Patrick, and George Thomas. The family would like to extend a special thanks to those who took care of him in the last year of his life, including Valley Health Care Center, 3rd Floor of Johnston Memorial Hospital, Home Nursing of Southwest Virginia, daughters – Linda Arnold and Debbie Head, grandsons – Zack Arnold and T.J. Ward, granddaughters – Becky Proulex and Beth Woodard, and special friend – Troy Ward. The family will receive friends from 6-7:45 P.M. Tuesday prior to the funeral service at Garrett Funeral Home. Online condolences may be sent to the family and a memorial video tribute may be viewed by visiting www.garrettfuneralhome.com.  Mr. Eller and his family are in the care of Garrett Funeral Home, 203 N. Shady Avenue, Damascus, VA 24236, 276-475-3631.

R. C. Eller, age 83, of Damascus, Virginia, passed away on Saturday, October 31, 2009 at Johnston Memorial Hospital in Abingdon, Virginia. He was a native of Washington County, Virginia and had lived in Bristol, Tennessee for thirty years before... View Obituary & Service Information

The family of R. Eller created this Life Tributes page to make it easy to share your memories.

Send flowers to the Eller family.