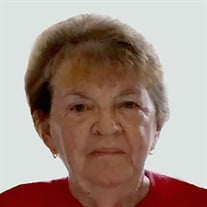 Peggy A. Roberts, 76, of Shady Valley, Tennessee passed away Wednesday, August 5, 2015 at her home in Shady Valley, Tennessee. She was born in Shady Valley, TN. on November 5, 1938, a daughter of the late George and Blanche Neely Hand. In addition to her parents, she was preceded in death by three sisters and three brothers. Peggy was a selfless person who always put others first. A loving mother, grandmother and great grandmother. She lived a simple life not getting caught up in worldly possessions but had everything she needed. She loved her Farmville game on the computer and enjoyed reading her Bible. She worked hard most of her life at one job for 36 half years and retired from Rex-Roth and then moved back home to Shady Valley. Peggy loved everyone and would do what she could to help someone in need. She was a long time sponsor of St. Jude's Hospital, helping children around the world. She will be missed by many and will never be forgotten. Peggy is survived by caregiver and friend, Patricia Bieri of Shady Valley, TN; two sons, Alan Roberts of Shady Valley, TN, and Steve Roberts and wife, Mary of Shreve, OH; six grandchildren, Ashley, Andrew, Tiffany, Kyle, Faith, and Brandon Roberts; six great grandchildren, Ashtan, Chloe, Brock, Kaden, Kaylynn, and Owen; two brothers, Joseph Hand and wife Doris of Wytheville, VA and Jack Hand and wife, Renee of Brooklyn, OH; several nieces and nephews. Graveside Services and Interment will be conducted at 11:00 am, Friday, August 7, 2015, at Sunset Memorial Park, with Rev. David Griffin and Rev. Ralph Vanover officiating. Pallbearers will be family and friends. Everyone is asked to meet at the cemetery at 10:45 am Friday. A Memorial Service will be conducted at 1:00 pm, Saturday, August 8, 2015 at Soul's Harbor Church, Damascus, VA. The family would also like to give a special Thank You to Caris Healthcare, neighbors, friends and family for their help and kindness to our family. Condolences for the family may be sent and viewed by visiting www.garrettfuneralhome.com. Mrs. Roberts and her family are in the care of Garrett Funeral Home.(276) 475-3631.

The family of Peggy A. Roberts created this Life Tributes page to make it easy to share your memories.

Peggy A. Roberts, 76, of Shady Valley, Tennessee passed away...