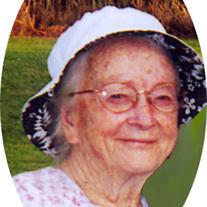 View this Videotribute Pearl Owens Winters, age 86, of Damascus, Virginia, passed away on Saturday, April 22, 2006 at her residence. She was a native of Laurel Bloomery, Tennessee, and had lived in Damascus, Virginia, most of her life. She was the daughter of the late James and Jane Owens and was the widow of Omar N. Winters, Sr. She was of the Pentecostal Holiness Faith. She is survived by two daughters, Jane C. Walls and her husband, Russell "Dean", of Damascus, Virginia, and Trula Mahala and her husband, Roy, of Shady Valley, Tennessee; three sons, William "Bill" Winters and his wife, Lois, of Abingdon, Virginia, James "Howard" Winters and his wife, Jane, of Mountain City, Tennessee, and Omar Winters, Jr., of Damascus, Virginia; one sister, Sylvia Matleen Key, of Damascus, Virginia; a special loving friend, Wanda Matney, of Damascus, Virginia; ten grandchildren, seven great grandchildren, and several nieces and nephews. The funeral service will be conducted at 8:00 P.M. Tuesday, April 25, 2006, in the Garrett Funeral Home Chapel with Rev. David Critcher and Bro. James Walls officiating. The committal service and interment will be at 11:00 A.M. Wednesday, April 26, 2006 at Sunset Memorial Park in Damascus, Virginia. Pallbearers will be Russell Walls, James Walls, Jared Walls, Timmy Key, David Price, and Jeff Lewis. Honorary pallbearers will be Howard Frank Key, Tony Key, and Mike McKamey. The family will receive friends from 6:00 to 7:45 P.M. Tuesday prior to the funeral service at the funeral home. Condolences may be sent to the family and a video memorial tribute may be viewed at www.garrettfuneralhome.com. Mrs. Winters and her family are in the care of Garrett Funeral Home, 203 N. Shady Avenue, Damascus, VA 24236, (276) 475-3631

View this Videotribute Pearl Owens Winters, age 86, of Damascus, Virginia, passed away on Saturday, April 22, 2006 at her residence. She was a native of Laurel Bloomery, Tennessee, and had lived in Damascus, Virginia, most of her life. She... View Obituary & Service Information

The family of Pearl Winters created this Life Tributes page to make it easy to share your memories.

Send flowers to the Winters family.