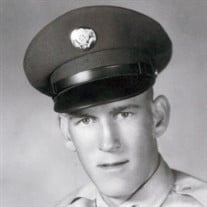 Paul Daniel "Danny" Campbell, 74, of Shady Valley, TN passed away on Wednesday, October 11, 2017 in the Sycamore Shoals Hospital, Elizabethton, TN surrounded by his loving family. He was born in Damascus, VA on November 8, 1942, a son of the late Paul and Ethel Campbell. In addition to his parents, he was preceded in death by a daughter, Patricia Roberts. He had lived in Glen Burnie, MD before moving back to Damascus, VA in 1958 and was a resident of Shady Valley, TN for many years. He was a Veteran of the U.S. Army and was a retired truck driver from R & B Trucking. He was of the Protestant faith. He is survived by his loving wife of 53 years, Joyce Campbell; three daughters, Jennifer Dixon and husband, Mike, of Bristol, VA, Melissa Norris and husband, Billy, of Shady Valley, TN and Melinda Tunnell and husband, Jeff, of Johnson City, TN; one son, Robert Campbell of Damascus, VA; two sisters, Rita Trent and husband, Mike, of Gray, TN and Kathi Mahala and husband, Walt, of Glade Spring, VA; 10 grandchildren, Shane, Dani, Jason, Mitchell, Haley, Dude, Jarrett, Mekenzie, Morgan, and Mason; 11 great grandchildren, and several niece and nephews. The family will receive friends from 6:00 PM until 8:00 PM Friday, October 13, 2017 at Garrett Funeral Home. The funeral service will be conducted at 11:00 AM Saturday, October 14, 2017 at the graveside at Sunset Memorial Park in Damascus, VA with Pastor Greg Alderman officiating. Military graveside rites will be conducted by the V.F.W. Patton-Crosswhite Post No. 6975. In lieu of flowers, the family is requesting that donations be made to Shady Valley Volunteer Fire Department, 10114 US-421, Shady Valley, TN 37688. Condolences for the family may be sent and viewed by visiting www.garrettfuneralhome.com. Mr. Campbell and his family are in the care of Garrett Funeral Home, 203 N. Shady Ave., Damascus, VA 24236; ph.#: (276) 475-3631.

Paul Daniel "Danny" Campbell, 74, of Shady Valley, TN passed away on Wednesday, October 11, 2017 in the Sycamore Shoals Hospital, Elizabethton, TN surrounded by his loving family. He was born in Damascus, VA on November 8, 1942, a son of the... View Obituary & Service Information

The family of Paul Daniel "Danny" Campbell created this Life Tributes page to make it easy to share your memories.