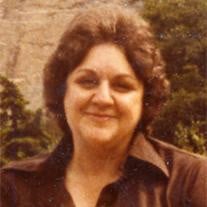 View this Videotribute Patty Finley Winebarger, age 63, of Damascus, Virginia passed away on Tuesday, March 22, 2005, at Bristol Regional Medical Center, Bristol, Tennessee. She was a lifelong resident of Washington County, Virginia, and was the daughter of the late Thomas and Eula Owens Finley. She was a member of the Damascus Church of Christ and was preceded in death by two brothers, Eugene Finley and Howard Finley, and one great grandson, Timmy Widener. She is survived by one son, Ronald Winebarger, of Oak Harbor, Ohio; one daughter, Patricia Wise, of Kingsport, Tennessee; three sisters, Peggy Harris, of Salisbury, North Carolina, Betty Repass, of Hermitage, Tennessee, and Dorothy Lipman, of Bluefield, West Virginia; one brother, Thomas B. Finley, Jr., of Damascus, Virginia; three grandchildren, six great grandchildren, and several nieces and nephews. The funeral service will be conducted at 11:00 A.M. Saturday, March 26, 2005, in the Damascus Church of Christ with Mr. Bill Reece, minister officiating. The committal service and interment will follow at Mock Cemetery. In lieu of flowers, the family requests that memorial contributions be sent to the National Kidney Foundation, 2601 Willard Road, Suite 103, Richmond, VA 23294. The family will receive friends from 6-8 P.M. Friday, March 25, 2005, at Garrett Funeral Home. Online condolences may be sent to the family and a memorial video tribute may be viewed at www.garrettfuneralhome.com. Mrs. Winebarger and her family are in the care of Garrett Funeral Home, 203 N. Shady Avenue, Damascus, Virginia. Telephone (276) 475-3631.

The family of Patty Winebarger created this Life Tributes page to make it easy to share your memories.

Send flowers to the Winebarger family.