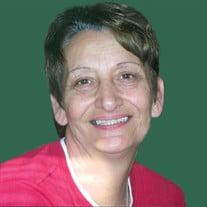 Patsy J. Hall Widener, 64, of Damascus, Virginia passed away on Monday, February 6, 2017. She was born on October 19, 1952, in Castlewood, Virginia, a daughter of Dorothy Hall and the late Frank Hall. In addition to her father, she was preceded in death by a brother, Billy Hall. She had lived most of her life in the Damascus area and was co-owner/operator of the Damascus Service Center for forty years. Pat was a beloved mother, a devoted wife, and a cherished Nanny to her grandchildren and great grandchildren. She was a member of Laurel Avenue Church of Christ. In addition to her mother, she is survived by her husband of 42 years, Joe Widener; her daughter, Angie Groseclose and her husband, Stacy, of Damascus, VA; her son, Frank Widener and his wife, Christy, of Damascus, VA; two step-sons, Allen Widener of Damascus, VA and David Widener of Norfolk, VA; four cherished grandchildren, Justin Widener and his wife, Brittney, Katie Bernard and her husband, Matt, David Widener and his wife, Julie, and Brendon Widener; two sisters, Joann Seiber and Kay Hall; one brother, Dayrel Hall; four beautiful great grandchildren, Landon, Macy, Cadence, and Carter; as well as many special nieces and nephews. Pat loved with her whole heart and was a cherished addition to every life she touched. She was a caring and loving mother, wife, sister, daughter, grandmother, great grandmother, and friend and will be sorely missed by all who knew her. The family will receive friends from 6:00 PM until 7:45 PM Thursday, February 9, 2017 at Garrett Funeral Home. The funeral service will follow at 8:00 PM Thursday in the Riverview Chapel at Garrett Funeral Home with Mr. Wayne Baker, minister officiating. The committal service and interment will be conducted at 11:00 AM Friday, February 10, 2017 at Sunset Memorial Park in Damascus, VA. Pallbearers will be Little Jimmy Hall, Steve Arnold, Jimmy Widener, Little Harold Hall, Benny Neal, Matt Bernard, and Don Foster. Honorary Pallbearers will be Roger Milhorne, Eddie Evans, Jack Abel, and Junior Turnmire. In lieu of flowers, the family is requesting that donations be made to Laurel Avenue Church of Christ, P.O. Box 324, Damascus, VA 24236. Condolences for the family may be sent and viewed by visiting www.garrettfuneralhome.com. Mrs. Widener and her family are in the care of Garrett Funeral Home, 203 N. Shady Ave., Damascus, VA 24236; ph.#: (276) 475-3631.

Patsy J. Hall Widener, 64, of Damascus, Virginia passed away on Monday, February 6, 2017. She was born on October 19, 1952, in Castlewood, Virginia, a daughter of Dorothy Hall and the late Frank Hall. In addition to her father, she was preceded... View Obituary & Service Information

The family of Patsy J. Hall Widener created this Life Tributes page to make it easy to share your memories.