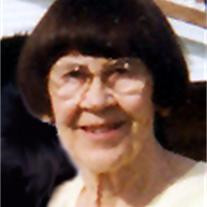 (To view Video Tribute you need a Broadband - DSL or Cable - connection) Olive Riffey, age 84, of Elizabethton, Tennessee, passed away on Saturday, December 23, 2006 at Sycamore Shoals Hospital in Elizabethton, Tennessee. She was a native of Brooklyn, New York, and was the daughter of the late Leland and Bessie Stutzman. She had lived in Abingdon, Virginia, for thirty-one years, and in Myrtle Beach, South Carolina for four years before moving to Elizabethton, Tennessee in 2005. She was a member of the Greendale Chapel in Abingdon, Virginia, and was the widow of Estel Riffey. She is survived by one daughter, Debbie Riffey, of Elizabethton, Tennessee; one granddaughter, Sunshine Hall, of Elizabethton, Tennessee; one great grandson, Devon Mitchell, of Elizabethton, Tennessee; one sister, Jean Townend, of Silver Spring, Maryland; a sisters-in-law, Blanche Payne, of Whitetop, Virginia, Jeanne Edwards and Della Riffey; and several nieces and nephews. The funeral service will be conducted at 11:00 A.M. Wednesday, December 27, 2006 in the Whitetop Baptist Church with Rev. Jerry Eggers and Rev. David Trivett officiating. The committal service and interment will follow in the Blevins Family Cemetery in Whitetop, Virginia. Pallbearers will be selected from family and friends. The family will receive friends from 10:00 A.M. to 11:00 A.M. Wednesday prior to the funeral service at Whitetop Baptist Church. Condolences and memories may be shared with the family by visiting www.garrettfuneralhome.com or faxed to (276)-475-5902. Mrs. Riffey and her family are in the care of Garrett Funeral Home, 203 N. Shady Ave., Damascus, VA 24236, (276)-475-3631.

The family of Olive Riffey created this Life Tributes page to make it easy to share your memories.

Send flowers to the Riffey family.