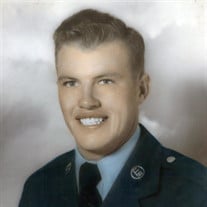 Okey Radford, 89, of Bristol, VA passed away on Monday, January 10, 2022 at his residence. He was born in Lanark, WV on February 11, 1932, a son of the late Harry Stephen Radford and Sarah Frances Martin Radford. He had lived in the Taylor Valley Community for 30 years prior to moving to Bristol in 2010. He was a retired veteran of the U.S. Air Force after 28 years of service having served in the Korean Conflict and Vietnam Era. He had worked for Columbus McKinnon in Damascus and later as a teaching assistant in the machine shop at Virginia Highlands Community College. He was a member of Trinity Baptist Church in Bristol, VA where he served as a deacon. Okey is survived by his loving wife, Phyllis A. Lee; one daughter, Robin R. Monk and her husband, Ed, of Taylor Valley, VA; three grandchildren, Tara Parks and her husband, Jason, of Bristol, TN, Sara Whittington and her husband, Bryan Brown, of Blacksburg, VA, and Matthew LaFlamme and his wife, Stephanie, of Taylor Valley, VA; six great grandchildren, Avery Ratliff, and her husband, Colt, Madison Parks, Lucas LaFlamme, Zelda LaFlamme, Elizabeth Whittington, and Claire Whittington; one great great grandson, Maverick Ratliff; and several nieces and nephews. The family will receive friends from 5:00 PM until 7:00 PM Thursday, January 13, 2022 at Garrett Funeral Home. The funeral service will follow at 7:00 PM Thursday in the Riverview Chapel at Garrett Funeral Home with Pastor Charles Sherfey officiating. The committal service and interment will be at 11:00 AM Friday, January 14, 2022 at Jackson -Lewis Cemetery in Taylor Valley, VA with military graveside rites by the U.S. Air Force Honor Guard. Those who wish to attend the committal service are asked to meet at the cemetery by 10:45 AM Friday. In lieu of flowers, the family is requesting that donations be made to Trinity Baptist Church, 220 Old Airport Road, Bristol, VA 24201. Condolences for the family may be sent and viewed by visiting www.garrettfuneralhome.com. Mr. Radford and his family are in the care of Garrett Funeral Home, 203 N. Shady Ave., Damascus, VA 24236; ph.#: (276) 475-3631.

Okey Radford, 89, of Bristol, VA passed away on Monday, January 10, 2022 at his residence. He was born in Lanark, WV on February 11, 1932, a son of the late Harry Stephen Radford and Sarah Frances Martin Radford. He had lived in the Taylor... View Obituary & Service Information

The family of Okey Radford created this Life Tributes page to make it easy to share your memories.

Okey Radford, 89, of Bristol, VA passed away on Monday, January...

Send flowers to the Radford family.