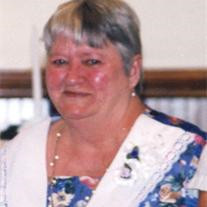 View this Videotribute Nellie G. Rouse, age 68, of Glade Spring, Virginia, went to be with her Lord and Savior on Tuesday, August 2, 2005 at her residence. She was a native of Johnson County, Tennessee and had lived in Washington County, Virginia most of her life. She was a daughter of the late Charlie and Victoria Wilson. She was preceded in death by a son, Jackie Rouse and a granddaughter, Ashley Nicole Rouse. Mrs. Rouse was a member of the Pleasant View Baptist Church. She is survived by her loving husband of fifty years, Jack R. Rouse; three daughters, Gladys Reynolds and her husband, Charlie, Debbie Smith and her husband, James, Lois Stophel and her husband, Mark, all of Damascus, Virginia; one brother, Ed Wilson and his wife, Cordelia "Tom", of Laurel Bloomery, Tennessee; two daughters-in-law, Jeanie Rouse, of Glade Spring, Virginia and Betty Jo Arnold, of Chilhowie, Virginia; three grandsons, Jon Rouse and his wife, Amy, Jackie Ray Rouse, and Austin Rouse; four granddaughters, Tiffany Price and her husband, Jason, Tonya Lawson and her husband, Shawn, Courtney Rouse, and Johnna Stophel; one step-granddaughter, Amanda Stophel; one step-grandson, Wayne Reynolds; five great granddaughters, Hayley and Katie Lawson, Amber Rouse, Jordan and Kenzie Price; four step-great grandsons, Emmanuel, McKinnley, and Gracyn Reynolds, and Tanner Armstrong; and several nieces and nephews. The funeral service will be conducted 2:00 p. m. Thursday, August 4, 2005 at Pleasant View Baptist Church, Glade Spring, Virginia with Rev. Roger Boyer and Rev. Warren Wilson officiating. The committal service and interment will follow in the Pleasant View Cemetery. Pallbearers will be nephews. The family will receive friends from 6-8:00 p. m. Wednesday, August 3, 2005 at the Garrett Funeral Home Chapel. The family would like to express a special thanks to Dr. Emory Robinette, Dr. Emily DeBord, Johnston Memorial Hospital 3rd Floor Nurses, Ruth Anderson, Grace Health Care Rehab, Southwest Hospice Caregivers, Home Health Care, and all of her friends for the love and support they have showed during her time of illness. Online condolences may be sent to the family and a memorial video tribute may be viewed at www.garrettfuneralhome.com. Mrs. Rouse and her family are in the care of Garrett Funeral Home, 203 N. Shady Ave., Damascus, VA. 24236, (276)-475-3631.

View this Videotribute Nellie G. Rouse, age 68, of Glade Spring, Virginia, went to be with her Lord and Savior on Tuesday, August 2, 2005 at her residence. She was a native of Johnson County, Tennessee and had lived in Washington County,... View Obituary & Service Information

The family of Nellie Rouse created this Life Tributes page to make it easy to share your memories.

Send flowers to the Rouse family.