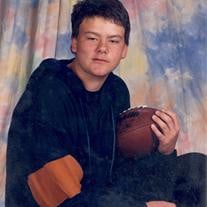 View this Videotribute Nathaneil Justin Moody, age 23, of Abingdon, Virginia, passed away Wednesday, October 12, 2005. He was a native of Johnson County Tennessee and had lived in Washington County, Virginia most all of his life. Justin was... View Obituary & Service Information

The family of Nathaneil Moody created this Life Tributes page to make it easy to share your memories.

Send flowers to the Moody family.