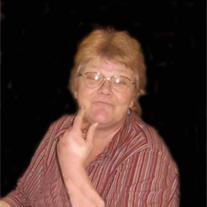 Nancy Sharon Summitt, age 51, of Damascus, Virginia, passed away Friday, May 14, 2010 at Johnston Memorial Hospital in Abingdon, Virginia after a lengthy illness. She was a life long resident of Washington County, Virginia and was a daughter of the late Thurman Blevins and Dorothy Blevins of Damascus, Virginia. She was of the Baptist Faith. In addition to her father, she was also preceded in death by a son, Justin Moody. In addition to her mother, she is also survived by her husband, Brent Summitt; one son, Michael Blevins; one daughter, Crystal Hamm and her husband, Walter; two sisters, Sue Puckett and her hasband, Brad, and Myrtle Jones and her husband, Tommy; four brothers, Charles Blevins and his wife, Gloria, Bobby Blevins and his wife, Jessica, Danny Blevins and his wife, Debbie, and Randy Blevins and his wife, Teresa; several nieces and nephews; and her dog, Princess. The funeral service will be conducted at 8:00 P.M. Monday, May 17, 2010 in the Riverview Chapel at Garrett Funeral Home with Rev. Ray Davis officiating. The committal service and interment will be at 4:00 P.M. Tuesday, May 18, 2010 at Forest Hills Memory Gardens in Abingdon, Virginia. Pallbearers will be Melissa Wright, Toni Puckett, Abby Spicer, Doug Puckett, Tom Carrier, Rosco Reynolds Jr., Shawn Gobble, and Nathan Self. Honorary pallbearers will be nieces and nephews. The family will receive friends from 6:00-7:45 P.M. Monday prior to the funeral service at Garrett Funeral Home. Online condolences may be sent to the family and a memorial video tribute may be viewed by visiting www.garrettfuneralhome.com. Mrs. Summitt and her family are in the care of Garrett Funeral Home, 203 N. Shady Avenue, Damascus, VA 24236, 276-475-3631.

Nancy Sharon Summitt, age 51, of Damascus, Virginia, passed away Friday, May 14, 2010 at Johnston Memorial Hospital in Abingdon, Virginia after a lengthy illness. She was a life long resident of Washington County, Virginia and was a daughter... View Obituary & Service Information

The family of Nancy Summitt created this Life Tributes page to make it easy to share your memories.

Send flowers to the Summitt family.