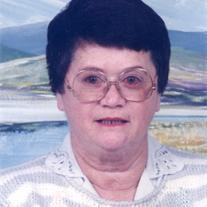 (Must have Broadband Connection to view Video Tribute) Nancy Poff Gentry, age 79, of Damascus, Virginia, passed away on Sunday, December 7, 2008 at Bristol Regional Medical Center, Bristol, Tennessee.  Nancy was born in Damascus on June 27, 1929 to the late Jasper Poff and Verna Sexton Poff.  She retired from the Washington County School System after working several years in the cafeteria. She was a devoted mother and grandmother and enjoyed spending time with her grandchildren. She was a member of the ladies auxiliary of VFW Post No. 9830, Eastern Star, and ladies auxiliary of Damascus Volunteer Rescue Squad and Damascus Senior Citizens. She was a member of the First Baptist Church in Damascus. In addition to her parents, she was preceded in death by four brothers and her loving husband of fifty years, Chet. She is survived by a daughter, Valarie Gentry Johnson and her husband, Rick, of Abingdon, Virginia; and her two special grandchildren, Justin Johnson, of Harrisonburg, Virginia and Erica Johnson, of Abingdon, Virginia; two special nephews, Jack Hutchins and Tommy Poff; and several other nieces and nephews. The funeral service will be conducted at 8:00 P. M. Tuesday, December 9, 2008 in the Garrett Funeral Home Chapel with Pastor Wayne Guynn and Pastor David Griffin officiating. The family will receive friends from 6-7:45 P. M. Tuesday prior to the funeral service at the funeral home.  Friends may call at any other time at the home of her daughter, Valarie Gentry Johnson. The committal service and interment will be at 11:00 A. M. Wednesday, December 10, 2008 at Sunset Memorial Park, Damascus. Online condolences may be sent and a video may be viewed by visiting www.garrettfuneralhome.com. Mrs. Gentry and her family are in the care of Garrett Funeral Home, 203 N. Shady Avenue, Damascus, VA 24236, 276-475-3631.

The family of Nancy Gentry created this Life Tributes page to make it easy to share your memories.

(Must have Broadband Connection to view Video Tribute) Nancy...