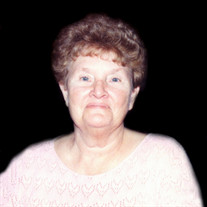 Muriel Thompson Trivett, age 92, of Damascus, Virginia passed away on Saturday, September 6, 2014 at Johnston Memorial Hospital in Abingdon, Virginia. She was a life long resident of Damascus, Virginia and was the daughter of the late Raymond and Laura Thompson. She was a member of the Damascus Senior Citizens where she participated in the senior citizens band. She was a member of the First Baptist Church in Damascus. Muriel enjoyed fishing, loved growing flowers, and feeding humming birds and squirrels. In addition to her parents, she was also preceded in death by her husband, Howard Trivett, one daughter, Becky Taylor; two granddaughters, Tina Huff and Avril Hoopaugh; and one great great granddaughter, Morgan Lynne Ware. She is survived by one son, Terry Trivett and his wife, Anne, of Hartsville, South Carolina; four daughters, Linda Henderson and her husband, John, of Richmond, Virginia, Sandra Nickels and her husband, Mike, and Diane Wade and her husband, Bill, all of Damascus, Virginia, and Debbie Barr and her husband, Ron, of Chilhowie, Virginia; one sister, Neva McClure of Taylor Valley, Virginia; 14 grandchildren, 24 great grandchildren, 9 great great grandchildren, several nieces and nephews; and a special friend, Stewart Blevins. The funeral service will be conducted at 8:00 P.M. Monday, September 8, 2014 in the Riverview Chapel at Garrett Funeral Home with Pastors Jim Denton and Jeanne Denton officiating. The committal service and interment will be at 11:00 A.M. Tuesday, September 9, 2014 at Sunset Memorial Park in Damascus. Pallbearers will be Josh Cook, David Trivett, Rocky Henderson, Kermit Turner, Aaron Barr, and Eddie Taylor. Honorary pallbearers will be Ron Barr, John Henderson, Bill Wade, Mike Nickels, Bob Bowers, Bob Osborne, and Randy Cornett. In lieu of flowers, the family requests memorial contributions be sent to the Children of Andrew Thomas Fens Trust Fund, c/o any Wells Fargo Bank. The family would like to extend a special thanks to her very special caregivers, Glenna Hodgson, Melissa Stanley, and Caris Hospice. The family will receive friends from 6:00 P.M. until 7:45 P.M. Monday prior to the funeral service at Garrett Funeral Home. Online condolences may be sent to the family and viewed by visiting www.garrettfuneralhome.com. Mrs. Trivett and her family are in the care of Garrett Funeral Home, 203 N. Shady Street., Damascus, VA 24236, ph.#: 276-475-3631.

The family of Muriel Thompson Trivett created this Life Tributes page to make it easy to share your memories.

Send flowers to the Trivett family.