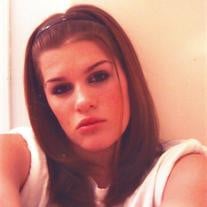 Michelle Renée Wolfe, age 16, of Damascus, Virginia, passed away Monday, October 3, 2005, at Bristol Regional Medical Center, Bristol, Tennessee from injuries received in an auto accident. She was a native of Damascus, Virginia and a member of the Junior Class at Holston High School where she was a member of the volleyball, football, wrestling, and track teams. Michelle was proud to be the first female on the Holston Football Team. She placed second in State in female wrestling in her freshman year. Michelle loved hip-hop music, her four wheeler, and animals, especially her cat Hobo. She gave a 110% in everything she did. Now she has gone to be with the Lord. She was a member of the Pleasant View Baptist Church. She is survived by her parents, Tim and Kerry Wolfe, of Damascus, Virginia; three sisters, Sasha Hikal and husband, Mouamen and their son, Amir, of Columbus, Ohio, Courtny Wolfe and Heather Wolfe, both of the home; one brother, Timothy Wolfe, Jr., of the home; paternal grandparents, John G. Wolfe, Sr., of Glade Spring, Virginia and Gracie Ferguson, of Meadowview, Virginia; maternal grandparents, Henry and Maggi Hand, of Shady Valley, Tennessee; and JoAnn and Michael Kokindo, of Arlington, Virginia; A Special Friend, Jonathan Price, of Taylors Valley, Virginia; and several aunts and uncles that loved her dearly; She was preceded in death by Papaw Ray Ferguson. The funeral service will be conducted 2:00 P. M. Saturday, October 8, 2005 at Pleasant View Baptist Church with Rev. Roger Boyer, Rev. Warren Wilson and Rev. Greg Blackburn officiating. The committal service and interment will follow in the Pleasant View Cemetery. Pallbearers will be Mike Williams, Phil Lineberry, Jonathan Price, Zach Titman, Emory Barlow, and Steven Hall. Honorary pallbearers will be her brother and uncles. The family will receive friends from 6-9:00 P. M. Friday, October 7, 2005 at Holston High School Auditorium. Condolences may be sent to the family at www.garrettfuneralhome.com. Michelle Renée Wolfe and her family are in the care of Garrett Funeral Home, 203 N. Shady Ave.,Damascus, VA. 24236, 276-475-3631.

Michelle Renée Wolfe, age 16, of Damascus, Virginia, passed away Monday, October 3, 2005, at Bristol Regional Medical Center, Bristol, Tennessee from injuries received in an auto accident. She was a native of Damascus, Virginia and a member... View Obituary & Service Information

The family of Michelle Wolfe created this Life Tributes page to make it easy to share your memories.

Send flowers to the Wolfe family.