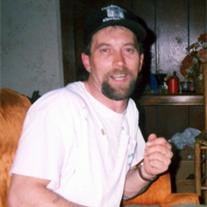 (To view Video Tribute you need a Broadband - DSL or Cable - connection) Michael Anthony Barker, age 45, of 31545 Terrys Drive, Damascus, Virginia, a precious son, father, and brother went to be with Lord on Sunday, June 4, 2006. He was a life long resident of Damascus, Virginia and was the son of Judy Barker and the late Bill Barker. In addition to his father, he was also preceded in death by his grandparents, Francis and Albert Jones and Robert and Ann Vannoy and his uncle, Jack Barker. He was an employee of Star Construction, Marion, Virginia, a former member of the Damascus Volunteer Fire Department and a member of the Damascus Church of Christ. In addition to his mother, he is survived by his son, Mikie Barker, of Damascus, Virginia; his Fiance`, Lisa Blanken, of Damascus, Virginia; two sisters, Margie Owens and her husband, Rick, and Lori Ann Blevins, all of Damascus, Virginia; two nephews, Jordan Blevins and William Blevins; one special niece, Chelsea Owens; two aunts, Sandra Parker and her husband, Steve, of Orange Park, Florida and Janet Ragan and her husband, Neal, of Damascus, Virginia;one uncle, Charles Jones and his wife, Connie, of Damascus, Virginia; and several cousins. The funeral service will be conducted at 2:30 P.M. Wednesday, June 7, 2006, in the Damascus Church of Christ, Railroad Avenue, Damascus, Virginia with Mr. Bill Reece, minister officiating. The committal service and interment will follow at Sunset Memorial Park. Pallbearers will be Rick Rhea, Phillip Smith, Jordan Blevins, William Blevins, Barrett Blevins, Fred McCall, Mack Milhorne, and Nathan Farmer. Honorary Pallbearers will be Terry Moser, Joey Blevins, Ronnie Cullop, Darrell Miller, Dean Whitt, Ricky Owens, Ernie Weaver, Jim McVey, and Brian Bowers. The family will receive friends from 7-9:00 P.M. Tuesday, June 6, 2006 at the Damascus Church of Christ. Condolences may be sent to the family and a video memorial tribute may be viewed at www.garrettfuneralhome.com. Mr. Barker and his family are in the care of Garrett Funeral Home, 203 N. Shady Ave., Damascus, VA 24236, 276-475-3631.

(To view Video Tribute you need a Broadband - DSL or Cable - connection) Michael Anthony Barker, age 45, of 31545 Terrys Drive, Damascus, Virginia, a precious son, father, and brother went to be with Lord on Sunday, June 4, 2006. He was a... View Obituary & Service Information

The family of Michael Barker created this Life Tributes page to make it easy to share your memories.

Send flowers to the Barker family.