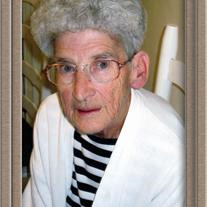 (To view Video Tribute you need a Broadband - DSL or Cable - connection) Mary Jacqueline F. "Jackie" Shupe, age 76, of Damascus, Virginia, passed away on Friday, March 23, 2007 at Johnston Memorial Hospital in Abingdon, Virginia. She was a native of Lundale, West Virginia, and had lived in Damascus, Virginia for the past fifty-six years. She was a daughter of the late Dana and Anna Fenner. Mrs. Shupe was an auxiliary member of the Damascus Volunteer Rescue Squad where she currently served as treasurer. She was a member of the Damascus Church of Christ. In addition to her parents, she was also preceded in death by her husband, Raymond B. Shupe; and two brothers, Everett Fenner and Billy Fenner. She is survived by one daughter, Wylene Milhorne and her husband, Mike, of Damascus, Virginia; two grandchildren, Buffy Milhorne of Damascus, Virginia, and Michael Milhorne and his wife, Susie, of Damascus, Virginia; two great granddaughters, Maggie Milhorne and Sadie Milhorne; seven sisters, Lucille Corum and Betty Gentry, both of Mountain City, Tennessee, Jean Kasserman and Judy Secrest, both of Rittman, Ohio, Joann Anderson, of Fairmont, West Virginia, and Marjorie Ewing and Lynn Lethcoe, both of Damascus, Virginia; and several nieces and nephews. The funeral service will be conducted at 2:00 P.M. Monday, March 26, 2007 in the Damascus Church of Christ with Mr. Bill Reece and Mr. Jim Hutchinson, ministers officiating. The committal service and interment will follow in the Phillippi Cemetery in Mountain City, Tennessee. Pallbearers will be Michael Milhorne, Robbie Lethcoe, Matthew Cook, Michael Cook, Fred Severt, and Ken Necessary. Honorary pallbearers will be the men of the Damascus Church of Christ and the auxiliary members of the Damascus Volunteer Rescue Squad. In lieu of flowers, the family requests that memorial contributions be sent to the Damascus Volunteer Rescue Squad, P.O. Box 458, Damascus, VA 24236. The family will receive friends from 7 - 9 P. M. Sunday, March 25, 2007, at Garrett Funeral Home. Condolences may be sent to the family and a memorial video tribute may be viewed by visiting www.garrettfuneralhome.com or you may fax condolences to 276-475-5902. Mrs. Shupe and her family are in the care of Garrett Funeral Home, 203 N. Shady Ave., Damascus, VA 24236, (276) 475-3631.

(To view Video Tribute you need a Broadband - DSL or Cable - connection) Mary Jacqueline F. "Jackie" Shupe, age 76, of Damascus, Virginia, passed away on Friday, March 23, 2007 at Johnston Memorial Hospital in Abingdon, Virginia. She was a... View Obituary & Service Information

The family of Mary F. Jackie Shupe created this Life Tributes page to make it easy to share your memories.