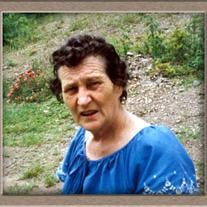 (To view Video Tribute you need a Broadband - DSL or Cable - connection) Mary Katherine Blevins, age 73, of Konnarock, Virginia, passed away on Friday, March 9, 2007 in Johnston Memorial Hospital. She was born April 25, 1933 in Washington County, Virginia. She was a daughter of the late Ulysses and Kate McDaniel Blevins. In addition to her parents, she was preceded in death by five brothers, Raymond, Harley, Frank, Leonard, and Clarence Blevins. She was a very loving mother, grandmother, sister, and friend to many. She was of the Baptist faith. She is survived by one daughter, Donna Trent, and her husband, Eugene, of Damascus, Virginia; one son, Joe Fritts, of the home; one grandson, Justin Dixon, of the home; three brothers, Lawrence Blevins and his wife, Jessie, Ira Blevins, and his wife, Shelby, both of Konnarock, Virginia, and Ed Blevins, and his wife, Betty, of Marion, Virginia; three sisters, Sarah Smith, of Lakeland, Florida, Nannie Hash, and her husband, Bill, of Nokesville, Virginia and Anna Campbell, and her husband, Jim, of Mountain City, Tennessee; special friends, Sarah Blevins, Betty Blevins, Jean Greer; one very special friend, Susie Hayes; special companion, Browser; and several nieces and nephews. The funeral service will be conducted at 8:00 P.M. Sunday, March 11, 2007 in the Garrett Funeral Home Chapel with Rev. Rex Carter and Rev. Charles E. "Jody" Blevins officiating. The family will receive friends from 6 until 8:00 P. M. Sunday prior to the funeral service at the funeral home. The committal service and interment will be at 11:00 A. M. Monday, March 12, 2007 at Azen Cemetery, in Konnarock, Virginia. The family and friends will go in procession to the cemetery which will leave the funeral home at 10:15 Monday morning. Pallbearers will be family and friends. Honorary pallbearers will be Jim Campbell, Bill Hash, nephews, and a grandson, Justin Dixon. Condolences may be sent to the family and a memorial video tribute may be viewed by visiting www.garrettfuneralhome.com or you may fax condolences to 276-475-5902. Ms. Blevins and her family are in the care of Garrett Funeral Home, 203 N. Shady Ave., Damascus, VA 24236, (276) 475-3631.

The family of Mary Blevins created this Life Tributes page to make it easy to share your memories.