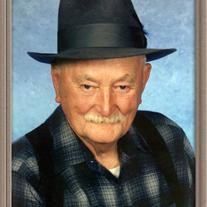 (To view Video Tribute you need a Broadband - DSL or Cable - connection) Marvin Edward Richardson, age 83, of Damascus, Virginia, passed away suddenly on Friday, January 26, 2007, at Holston Valley Medical Center. He was a life long resident of Washington County, Virginia, and was the son of the late Wesley and Ollie Richardson. He was a very kind and humble person that everyone loved and respected. He was well known for his hat and his appearance resembling Grandpa Jones, causing many people to ask him for his autograph. He was a member of the Christian Church in Taylors Valley but had attended Wrights Chapel in Damascus for many years. In addition to his parents, he is also preceded in death by his wife, Helen Trivett Richardson; a daughter, Linda Sue McBride; a grandson, James Howard; and three sisters, Mary Shortt, Verna Barr, and Stella Woods. He is survived by one son, Jerry Ford Richardson of Damascus, Virginia; three daughters, Freda Crabtree of Damascus, Virginia, Nita Howard of Roanoke, Virginia, and Trish Akers of Damascus, Virginia; two sisters, Martha Pennington of Damascus, Virginia, and Effie Sheets of Chilhowie, Virginia; eleven grandchildren, fifteen great grandchildren, several nieces and nephews, also a special friend, Edith Owens of Damascus, Virginia. The funeral service will be conducted at 2:00 P.M. Monday, January 29, 2007 at Wrights Chapel with Rev. Gary Ritchie and Rev. August Lageman officiating. The committal service and interment will follow in Sunset Memorial Park in Damascus. Pallbearers will be the following grandsons: Jerry Richardson, Ron Richardson, Rick Richardson, Joe Richardson, Eric Crabtree, Tim Crabtree, Darren McBride, and Adam Richardson. Honorary pallbearers will be the following granddaughters, Missy Glod, Jennifer Edwards, Brandi Owens, and Delmar Blevins and Doc Huffman. In lieu of flowers, the family requests that memorial contributions be sent to the Cancer Outreach Foundation, 104 Abingdon Place, Abingdon, VA 24211, the American Lung Association, 370 E. Main Street, Abingdon, VA 24210, or the American Heart Association, 208 Sunset Drive, Johnson City, TN 37604. The family will receive friends from 6-8 P.M. Sunday, January 28, 2007 at Garrett Funeral Home or at any time at his residence. Condolences may be sent to the family and a memorial video tribute may be viewed by visiting www.garrettfuneralhome.com or fax condolences to 276-475-5902. Mr. Richardson and his family are in the care of Garrett Funeral Home, 203 N. Shady Ave., Damascus, VA 24236, (276)-475-3631.

The family of Marvin Richardson created this Life Tributes page to make it easy to share your memories.