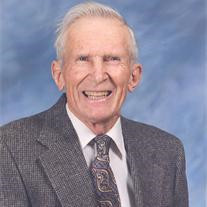 View this Videotribute Mark Glenn Canter, age 86, of Damascus, Virginia, passed away Saturday, January 7, 2006 at Wellmont Hospice House in Bristol, Tennessee. He was a native of Johnson County, Tennessee, and had lived in Damascus, Virginia, most of his life. He was a veteran of the U.S. Navy during World War II and retired from the Raytheon Corporation and was a farmer. Mr. Canter was a member of the American Legion and the Taylorsville Masonic Lodge in Mountain City, Tennessee. He was a former member of the Damascus J.C.'s, and a member of the Damascus United Methodist Church. He was preceded in death by his wife, Therza Henry Canter, and three brothers and two sisters. He is survived by two daughters, Linda Wells and her husband, Scott, of Rural Retreat, Virginia, and Jane Cook and her husband, Stan, of Bristol, Virginia; one son, Mark G. "Ronnie" Canter, II and his wife, Suann, of Abingdon, Virginia; two sisters, Cora Lewis, of Creston, North Carolina, and Dora Wood, of West Grove, Pennsylvania; seven grandchildren, three great grandchildren, and several nieces and nephews. The funeral service will be conducted at 11:00 A.M. Tuesday, January 10, 2006, in the Damascus United Methodist Church with The Rev. Jane Ayers officiating. The committal service and interment will follow at Sunset Memorial Park in Damascus, Virginia. Pallbearers will be Blake Cook, Brandon Cook, Brett Cook, Eric Stauffer, David Henry, Sr. and Bill Roark. Honorary pallbearers will be Tommy Musick, Charlie Musick, Paschal Grindstaff, Paul Lethcoe, Bob Cole, and Terry Abrams. In lieu of flowers, the family requests that memorial contributions be sent to the Wellmont Hospice House, 280 Steele's Road, Bristol, Tennessee 37620 or to the Damascus United Methodist Church, P.O. Box 358, Damascus, Virginia 24236. The family will receive friends from 10:00 to 10:45 A.M. Tuesday prior to the funeral service at the church or at any time at the home of his son, Ronnie Canter. Condolences may be sent to the family and a video memorial tribute may be viewed at www.garrettfuneralhome.com. Mr. Canter and his family are in the care of Garrett Funeral Home, 203 N. Shady Ave., Damascus, VA 24236, 276-475-3631.

View this Videotribute Mark Glenn Canter, age 86, of Damascus, Virginia, passed away Saturday, January 7, 2006 at Wellmont Hospice House in Bristol, Tennessee. He was a native of Johnson County, Tennessee, and had lived in Damascus, Virginia,... View Obituary & Service Information

The family of Mark Canter created this Life Tributes page to make it easy to share your memories.

Send flowers to the Canter family.